Imagine it’s late at night, and you’ve been driving for hours to a new city. You’re exhausted. You turn onto a highway on-ramp and pass a car that seems to swerve out of your way. What’s going on? Then you see the flashing red lights and the glaring “WRONG WAY” signs on each side of the road. You perk up. You were about to merge on the highway going in the wrong direction. You check for cars and carefully turn around. That was a close call.

That’s exactly what traffic engineers in Nevada are hoping will happen once their wrong-way driver signs are enhanced. The Nevada Department of Transportation (NDOT) embarked on a project beginning in April 2017 to enhance roadway signage, ramp meters, and wrong-way driver detection systems, among other solutions, to improve safety on U.S. 395 in the North Valleys. 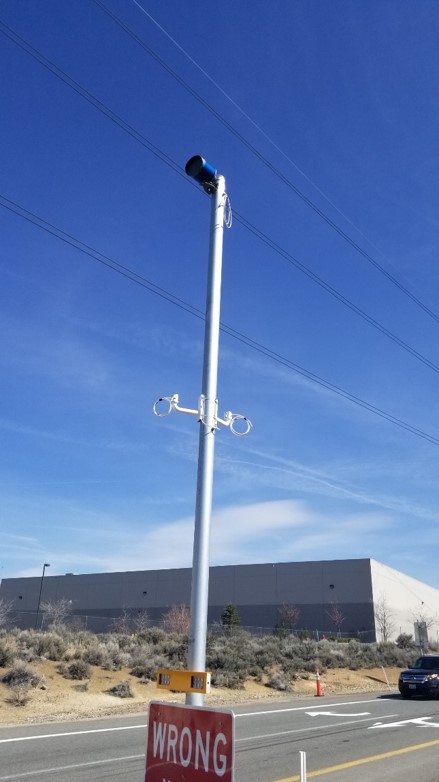 “Wrong Way” signs already existed on all freeway ramps, placed to alert drivers errantly traveling in the wrong direction. NDOT sought to add additional flashing warning signals and detection systems. According to NDOT, there were 279 wrong-way driver crashes on Nevada’s freeway systems between 2005 and 2015. These crashes resulted in 41 fatalities and 125 injuries, and are often caused by impaired or confused drivers, NDOT reported.

NDOT received permission from the Federal Highway Administration (FHWA) to experiment with using rectangular rapid flashing beacons (RRFBs), which the FHWA had previously only approved for mid-block crosswalks. Rather than the usual yellow, these wrong-way driver beacons would be red. If a driver goes the wrong way, the system uses a radar to detect it, turns the beacons on, and has a camera that films it, so it can send a video clip of the violation back to a central command center. From there, they can send police officers out to catch them, hopefully before they can do any damage or hurt somebody.

The wrong-way driver light bars would be monitored for three years following their activation to determine if they’re effective: when the lights come on, do people turn around?

“The real intention of this project is that the lights come on, they see the lights, they turn around and go back, so they self-correct, and there’s no action needed.” – Jon Dickinson, Sierra Transportation & Technologies

Distributor Sierra Transportation & Technologies called upon Carmanah, which they had worked with on many crosswalk projects before, as well as Viion Systems, also based in Victoria, for the smart technology in this project. Sierra has more than 50 years of combined experience in transportation control equipment, with offices in Reno, Las Vegas, and Phoenix.

Carmanah provided its light bars for 46 wrong-way driver detection systems. It also provided the “brains” of the systems, which are pole-mounted, electrically powered, and self-contained. 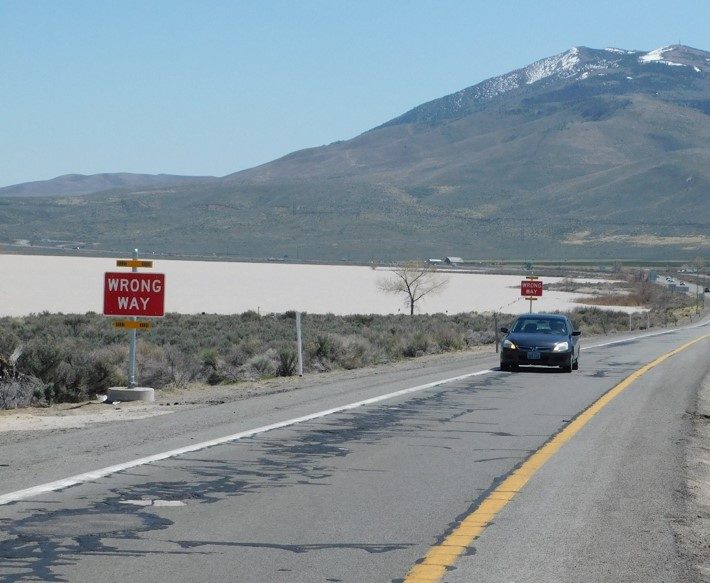 “It was kind of shooting in the dark: how can we put this together to make a good, reliable system?” says Jon Dickinson, a project manager at Sierra. “On the [beacon] side, Carmanah stands on top. As long as you tell it to turn on, it’s going to turn on and it’s going to work. So we just had to get the smart end of it to turn it on when there was a car going the wrong way.”

Carmanah previously did a similar design for the Florida Department of Transportation. “This obviously isn’t the typical installation for these light bars, so there had to be a modified Carmanah controller designed for the wrong-way driver application,” says Aaron Lockwood, Business Development Manager for Carmanah’s Traffic division.

Dickinson is grateful for that assistance. “It was nice that Carmanah could whip this out the box and create the back plate that was needed,” he says. “Carmanah was there and willing to do that, and Aaron was great to work with.”

Early on, NDOT considered several ways to make the signs as attention-grabbing as possible. They chose red beacons and changed the height from the typical signage height.

“The real intention of this project is that the lights come on, they see the lights, they turn around and go back, so they self-correct, and there’s no action needed,” says Dickinson. “That’s why they use the RRFB with the fancy flash rates versus a [circular] flashing beacon—you see those all the time, and they don’t draw a lot of attention. The beacons in red clearly light up the ramp.”

Meanwhile, they were adjusted slightly for the new application: “We lowered the height because a lot of your drowsy drivers or inattentive drivers, under the influence of something, their eyes are at a lower height,” Rodney D. Schilling, Assistant Chief Traffic Operations Engineer at NDOT, told KTVN.

The first 20 of the systems are installed, and there are another 18 to be installed in northern Nevada and eight in the south. They have not been turned on yet, according to Dickinson. “The biggest issue is getting everyone comfortable with the data,” he says.

NDOT has developed a spec that would be open for anyone to use. They sent it to a few manufacturers to confirm its viability. This opens the door for more projects like this in Nevada in the future, and perhaps can be a model for other states, too.

“These are all AC-powered, but you could easily make these solar—at least the signs—and you could almost put everything in the cabinet except the camera and radars,” says Dickinson. “There are a lot of possibilities going forward for how to package this.”

FHWA Funding, TAP and Other Grant Sources for Your Bicycle and Pedestrian Program