SpeedCheck Signs Receive An A+ Grade 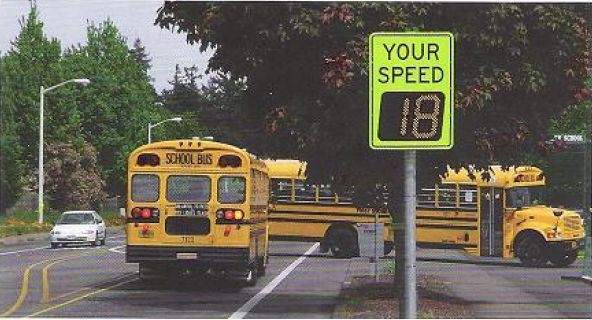 Police Sergeant Joseph Deignan admits he’s not the best driver on the road. As an officer within the traffic division for the city of Watertown, Mass., Deignan has seen his share of automobile accidents and severe injuries caused by speeding drivers. Yet he still knows he sometimes drives too fast. So it was really a revelation for Joe when one day, he drove by a radar SpeedCheck sign and found himself slowing down.

“It actually worked”, said Deignan. “I wasn’t intent on speeding, I simply wasn’t aware of my speed at the time. The SpeedCheck sign refocused my attention from whatever was on my mind at the time, back to my speedometer. My immediate reaction was to slow down and adjust my speed in accordance to the posted limit.”

Looking back on this experience, Sergeant Deignan figured that if this technology got him to slow down, chances were good that it would work for other drivers as well.

Radar SpeedCheck sign—also known as driver feedback signs, radar speed signs and a variety of other nomenclatures—display to drivers the speed of their cars as they drive by. They may also display warning messages or flash lights at drivers traveling at particularly fast speeds. In doing so, the displays act as a reminder to drivers to check their speedometers and to adjust their speeds accordingly.

Today, thanks in part to Sergeant Deignan’s revelation, the city of Watertown now has permanently mounted radar SpeedCheck signs installed along the busy streets of each of its five school zones. Using data collection technology that works with the signs, the city has determined that the displays have a significant impact on slowing traffic around these particularly hazardous locations.

“It is estimated that half of school children hit by cars in school zones are actually hit by parents of students at the same school,” said Cole. “The use of radar speed signs is proving to be one of the most valuable tools available for increasing the safety of those children that do walk or ride their bicycle to school.”

“The first radar speed sign we installed was on a busy four-lane highway alongside one of our elementary schools,” said Deignan. “Prior to this, we were using flashing lights to remind drivers of the slower school zone speed limits. Over time, the flashing had become virtually invisible to most drivers. Average speeds were about 10 to 17 miles per hour over the limit.”

According to Deignan, two months after the speed display was in operation, average speeds dropped by about 10 mph—an amount that can have a significant effect on reducing accidents and the severity of injuries when accidents do occur. 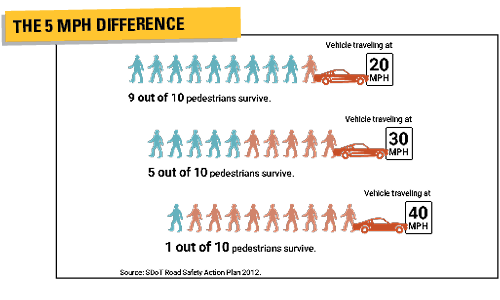 Studies have shown that in the event of a pedestrian-related traffic accident, the reduction of speed by just 10 mph can make the difference between a cast or a casket. According to a 1990 report from the US Department of Transportation, the number and severity of pedestrian-related accidents is directly related to automotive traffic speeds. While only five percent of pedestrian accidents reviewed in the report resulted in fatalities when the cars were traveling 20 mph or less, this number jumped to 40 percent when the cars were driving 30 mph and 80 percent at 40 mph.

Like Watertown, thousands of cities across the country confront concerns over school zone traffic each year. This problem has only increased as the number of children being driven to school has grown. According to Jen Cole, director of the Safe Routes to School program for Feet First, a non-profit advocacy group dedicated to the promotion of walking, one of the key reasons that more parents are opting to drive their children to school is that they perceive it to be the safest option. Ironically, the subsequent increase in cars that this creates near schoolyards only serves to augment the hazards to those children that do walk.

“It is estimated that half of school children hit by cars in school zones are actually hit by parents of students at the same school,” said Cole. “The use of radar speed signs is proving to be one of the most valuable tools available for increasing the safety of those children that do walk or ride their bicycle to school.”

During 2009’s “Walk & Roll To School Month,” an annual Feet First event designed to encourage both children and parents to walk together to school, the non-profit used a radar speed sign to increase pedestrian safety.

“The distractions that parents face as drivers dropping off and picking up their children can be enormous,” said Cole. “The SpeedCheck signs help remind these drivers to slow down and be particularly cautious.”

In Illinois, three SpeedCheck signs installed near and around one of Naperville Township’s elementary schools are taking the guesswork out of school zone speed limits. Using the display’s internal scheduling capabilities, the units have been set to operate only during times when school zone speeds are in effect.

“We tried other solutions including posting a deputy sheriff and placing radar speed wagons in trouble spots,” said Stan Wojtasiak, highway commissioner for Naperville Township Road District 31, “but the problems resumed as soon as these measures were removed. The permanently mounted SpeedCheck displays continue to work year-round.”

Months after being employed, the permanently mounted signs continued to reduce speeds by approximately 12.4 percent. In addition, the number of speeding cars was greatly reduced and the 85th percentile speed was also significantly decreased. The report concluded that the use of radar SpeedCheck signs in school zones produced a positive impact on the drivers’ behaviors for a long period of time.

A growing number of traffic research studies have confirmed what many school administrators, traffic engineers and safety professionals have witnessed first-hand. Radar speed signs can have both an immediate and long-lasting impact on slowing down cars and keeping children safe around schools, playgrounds and neighborhood parks.

Finding two studies published in 2006 by The Journal of the Transportation Research Board reported that vehicle speeds were reduced in school zones by about 17.5 percent when radar speed signs were first installed. Months after being employed, the permanently mounted signs continued to reduce speeds by approximately 12.4 percent. In addition, the number of speeding cars was greatly reduced and the 85th percentile speed was also significantly decreased. The report concluded that the use of radar SpeedCheck signs in school zones produced a positive impact on the drivers’ behaviors for a long period of time.

In 2005, the city of Mount Vernon, Wash., purchased its first two SpeedCheck signs. Both were mounted on mobile trailers so that they could be moved and used at various school sites throughout the city’s jurisdiction. After their effectiveness was proven, the city replaced the mobile-displays with permanently mounted signs. Over the next two years, Mount Vernon purchased and installed several more radar SpeedCheck signs, bringing the total number currently in use to 14.

“The city felt that a large percentage of motorists had become numb to the typical black-on-yellow school zone signs we had used for years,” said Dean Gilbert, public works inspector for Mount Vernon. “We replaced them with radar speed signs that have a more visible display. We also installed amber LED lights above the speed limit displays that flash when approaching cars exceed the limit.”

Eight of the displays now being used by the city are equipped with traffic data collection capabilities that provide information on the number and average speed of cars passing by during various times throughout the day. By comparing this data over time, city officials can confidently quantify the effectiveness of the signs.

Mount Vernon officials also decided to run each of their 14 signs using solar power, rather than hardwiring them to external electrical sources. Still, the signs work year-round and have enough power to run the auxiliary flashers.

“We’ve noticed that most motorists react instantly to the flashing lights,” said Gilbert. “Apparently they do not want to be seen by others as lawbreakers.”

According to a 2007 survey of traffic engineers and safety professionals, radar SpeedCheck signs were consistently ranked the solution of choice for slowing traffic around school zones and neighborhood streets. The survey, commissioned by Information Display Company, found that more than 96.5 percent of respondents agreed or strongly agreed that SpeedCheck signs were effective in this regard. This compares to only 33.3 percent or less that felt similarly about speedbumps and other traffic-calming solutions.

Each new school year, concerns over childhood safety take top priority for thousands of parents, teachers and school administrators. In many cases, a key component of the safety equation involves the protection of children as they walk to and from school. Ensuring that drivers adhere to school zone speed limits is a key piece to solving the problem and radar speed signs have, for hundreds of cities across the country, proven to be a big part of the answer.