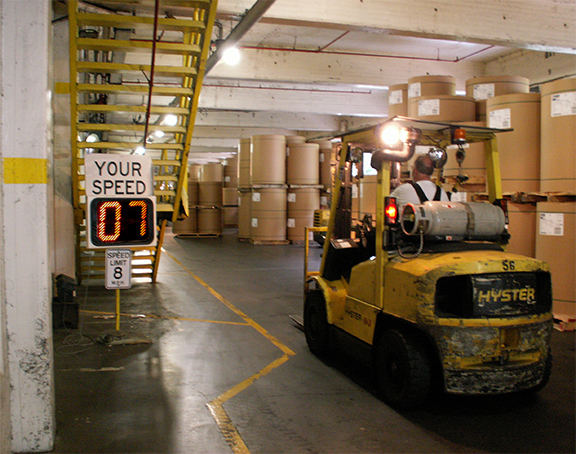 Forklifts are involved in over 34,000 serious injuries and nearly 100 deaths in the United States each year. According to OSHA, a large number of these accidents are the result of excessive forklift speeds. Unfortunately, most forklift trucks do not come equipped with speedometers. Enforcing and monitoring forklift truck speeds can be difficult.

West Linn Paper Company’s shipping-receiving supervisor, Peggy Closner is responsible for ensuring the safety of all operations at the dock. She knew that in the U.S., there are over ½ million forklift-related accidents that occur on the job each year. It was hard to enforce speed limit regulations because forklifts do not come with speedometers. Drivers therefore had to guess at their rate of speed.
Closner not only wanted to ensure that company drivers could determine their own speed but she also wanted a way to monitor their driving behavior herself.

To monitor speeds and reduce forklift-related accidents, West Linn Paper Company of West Linn Oregon installed radar speed signs in strategic locations such as around loading docks and inside warehouses.

We knew we had to do something,” said Closner. “We tried installing speedometers on the trucks but with all the vibrations, they never seemed to last very long. Then it struck me that the same type of signs used to display the speeds of passing vehicles on public roads could be equally effective on our company campus.

West Linn Paper Company installed an IDC radar speed sign by the loading dock. The impact was immediate. Not only are drivers able to monitor their own speed, but so are outside observers…and the drivers know it. The company recently purchased several more signs from Information Display Company and concerns over forklift speeding issues are over.

While the US Department of Labor Occupational Safety & Health Administration (OSHA) doesn’t recommend a specific speed for forklift drivers, they do indicate that the responsibility is for the Operator to drive within the employer-specified speed limit.

The number of industrial uses for SpeedCheck radar speed signs, variable speed limit signs and intelligent traffic signs continue to grow, and includes a wide array of applications such as:

What they all have in common is reducing risk, injury, accidents or property loss due to drivers operating at unsafe speeds.

SpeedCheck speed display signs are easy to set up and move around the warehouse. This tends to be the best solution around forklifts. The problem with forklifts is that drivers have no idea how fast they are driving and our SpeedCheck radar speed signs are ideal for keeping them driving at safe speeds.

Most of our industrial customers tend to install permanent pole-mounted radar speed display signs at their facilities. This gives the best protection for the display and is a constant reminder to the drivers of their speed.