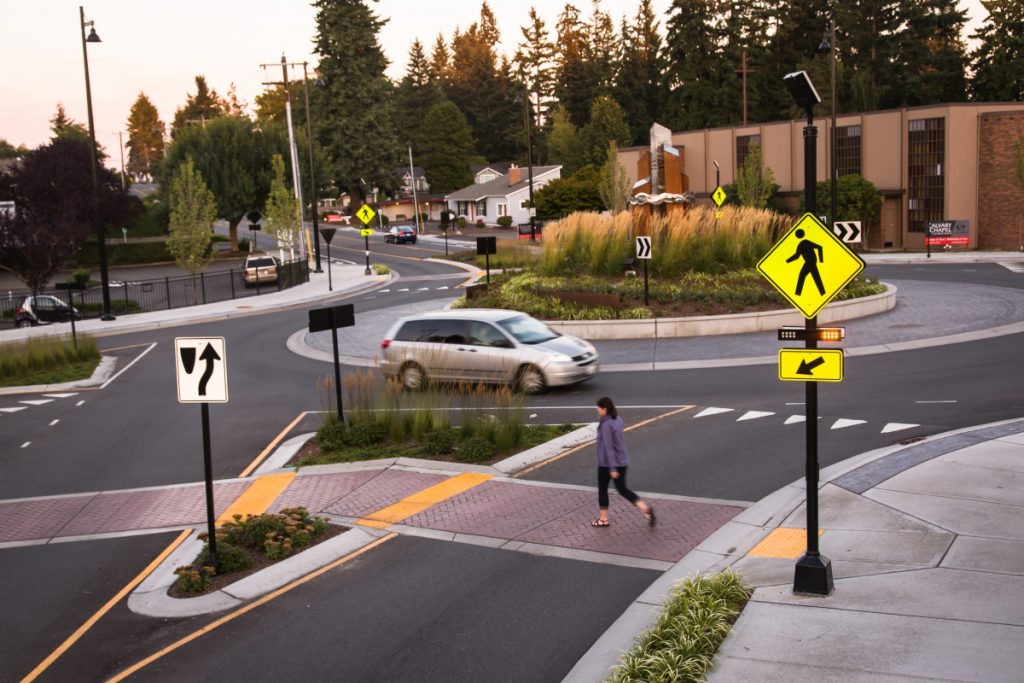 Overview: In the city of Edmonds, Washington, a five-way intersection, located where 212th Street SW, Bowdoin Way, and 84th Avenue W converge, was often congested, and several serious accidents had occurred there. The intersection was given an “F” rating (“A” is best) in a 2008 transportation plan based on traffic delay time, congestion, and other factors. In 2012, the city decided to go ahead with a plan to replace the intersection with a roundabout, which would increase the location’s rating to a “B.”

Public Works Director Phil Williams told the Edmonds Patch in 2011 that adding a roundabout would speed up traffic, decreasing delays in peak traffic hours from two minutes down to 10 seconds. In addition, reports had indicated 93,000 gallons of fuel would be saved each year with a roundabout in place.

The project included water and stormwater utility replacement and improvement, overhead utility conversion to underground, demolition and new construction of pavement and sidewalk, street lighting, irrigation, landscaping, and more. The new intersection would also improve accommodation for bicycle and pedestrian activity. To this end, the city required safe mechanisms for pedestrians to cross the intersection.

Our Solution: To improve pedestrian safety, Carmanah provided 10 rectangular rapid flashing beacons (RRFBs) for the project, positioned in pairs at each of the five entry points of the roundabout.

Recognition: Williams explained at the 2014 ribbon-cutting ceremony that almost 90% of the afternoon peak traffic congestion would be avoided thanks to the roundabout. While there was some initial public pushback for the project, pedestrians and local residents now feel safer when crossing the road and even came forward to tell Mayor Dave Earlingabout their change of heart. “I apologized to the Mayor yesterday at the Ribbon cutting,” one citizen commented to the Edmonds News. “I have lived and owned businesses at 5 Corners for 30 years. I thought it was a waste of money and time. I was wrong.”

The design and construction of the entire project totaled $2.5 million and used FHWA and local funds.

In November 2016, the Five Corners Roundabout received a Director’s Award from the Washington State Department of Transportation (WSDOT) and the Federal Highways Administration (FHWA).

Technical Bulletin B-108: Terms of our warranty for 3rd party devices