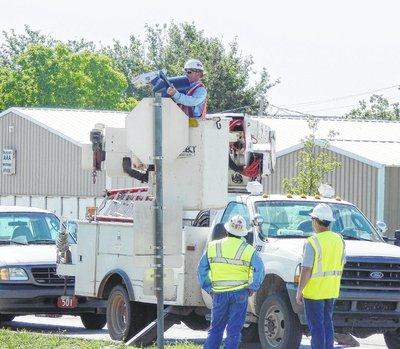 (photo courtesy of The Altus Times)

The City of Altus, Oklahoma had a problem. A problem that looked like a four-way stop in a rural location that drivers just weren’t stopping for. Nighttime was a particularly scary time at the intersection as drivers often simply didn’t see the sign due to the lack of illumination on the roadway. But surprisingly, the recorded accidents at the intersection had all happened during the day, indicating the problem wasn’t just nighttime visibility.

To complicate the challenge, getting the appropriate amount of power to the site was going to be expensive. One side of the intersection had only high voltage power while the other side had no power at all. In addition, the location didn’t warrant a full traffic signal. What to do?

Mike Villareal, Operations Foreman for Altus Tower, City of Altus picked up the phone and called Bill Heim with Gades Sales, Carmanah’s authorized distributor in Oklahoma. Bill suggested that Mike consider the Carmanah R247E and explained that because the R247E warning beacons were solar-powered they wouldn’t require any wiring, solving the power problem at the site. Additionally, because the beacons were designed to flash 24-hours a day, they would enhance visibility of the signs for drivers both day and night. “Installing power at the site would have been a very costly procedure,” says Villareal. “The cost savings offered by the Carmanah solar beacons were a no-brainer.”

“Installing power at the site would have been a very costly procedure,” says Villareal. “The cost savings offered by the Carmanah solar beacons were a no-brainer.”

The installation process also proved to simplify things for the City. The lights fit directly onto the existing standard sign posts. “It was the easiest installation,” says Villareal. “We had to get a bucket truck simply because the stop signs were on a bit of a slope. Without the slope, we wouldn’t have needed any special equipment at all.”

After some time to put the new beacons to the test the City is just as happy now as they were when they first installed them. “Since we installed the beacons we’ve had 60 mile-per-hour winds here,” says Villareal. “No problem.”

But do the beacons solve the visibility problem the City really wanted to address?

“You can see those beacons blinkin’ a solid mile away,” Villareal notes. “We liked them so well we’ve already purchased more Carmanah solar beacons for our school zone signs.”
Not only was the City of Altus able to solve a unique challenge with the use of Carmanah solar technology, they were also introduced to a solution that was easy to deploy in other locations. By enabling city officials to improve drive awareness of important signage in all areas of town, Carmanah solar technology is playing an integral role in protecting and enhancing the safety of the citizens of Altus, Oklahoma. And that’s a job to be proud of.