How to Resurrect Infrastructure Week

Each year, Infrastructure Week, a US non-profit organization, holds its eponymous event to bring together everyone from leaders to businesses and workers to raise awareness and push toward the common goal of improving infrastructure across the country. Infrastructure Week notes that:

Infrastructure is a common topic of conversation these days: the American Society of Civil Engineers gives the infrastructure system a D+ grade in its latest report card.

While these organizations raise awareness, those in charge have not tended to follow through on plans to discuss the issues at hand. Around this time of year, media discussions abound on the idea of “Infrastructure Week” being a joke when it comes to the current administration. “It has come to promise five business days of drama and discussion about almost anything other than infrastructure,” according to a CityLab story published in 2019. Case in point, in May 2019, a planned discussion about a possible $2 trillion package disintegrated before it began.

Furthermore, organizations like Transportation for America believes the priorities are backward:

“Here’s a different take on #InfrastructureWeek,” a May 13, 2019, tweet read. “Why give more money to the same people who have been neglecting basic maintenance in order to build more things we can’t afford to maintain?”

They went on to suggest that meeting current and future infrastructure needs will require us to “increase accountability, prioritize repair, and guarantee results with our current spending,” instead of simply increasing the budget for building more things we won’t be able to afford to maintain. 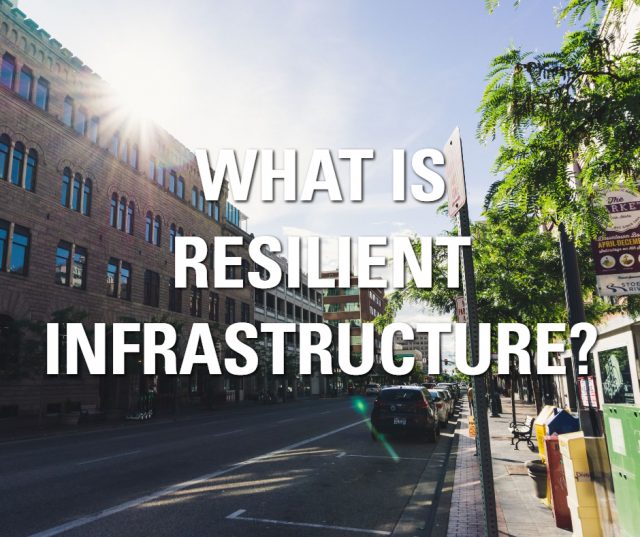 What is a resilient city?

How can we turn to resiliency instead? Resilient cities can sustain, adapt, and grow as future uncertainties unfold, thanks to systems built before they were needed. These systems can include ways of dealing with emergency situations or other daunting challenges like climate change. A city also becomes resilient by offering amenities and resources that draw people to live and work within them. Building resilience into the city structure will help it withstand and bounce back from unexpected shocks and stresses quickly and easily.

The United Nations has declared October 31 World Cities Day, and the 2018 theme was Building Sustainable and Resilient Cities. “Cities need support to become resilient and develop their capacity to absorb the impact of hazards, protect and preserve human life and limit damage to and destruction of public and private assets while continuing to provide infrastructure and services after a crisis,” according to the UN’s messaging.

There are many other organizations and events helping cities reach these goals. In 2018, Barcelona hosted Resilience Days, “the global platform for discussion and learning between leading cities and international organizations working to build more resilient communities all over the world.” The event aimed to develop and foster new working partnerships to help collectively face the challenges that face our cities, even if the cities have different infrastructure development needs.

For example, while two cities may have different needs for preparing for floods—a dike on a river versus an ocean archipelago—they can both find solutions that make them resilient to the threat of water. Likewise, a city facing frequent brownouts or blackouts can find alternate sources of energy to make them resilient to power outages—which could include wind farms, solar-powered street lights, hydroelectric dams, or other renewable energy sources.

What can cities do?

The National League of Cities recently released their State of Cities 2019 report, analyzing more than 150 annual speeches given by mayors of cities, towns, and villages across the US. Here are three key findings:

“While Washington talks, mayors take action. As the government that’s closest to the people, mayors work every day to reach across the aisle, bring people together, and find solutions that help our residents. Whether you’re talking about infrastructure or climate change, mayors know that local action is critical to making our cities, towns and villages more sustainable and economically competitive. The State of the Cities report shows that mayors are addressing these issues head-on and are planning for the long-term health and wellbeing of their communities.” – NLC President Karen Freeman-Wilson, mayor of Gary, Indiana, May 22, 2019, press release

Where can you start? There are many ways to look at resiliency, but here are a few ideas to get started:

From the United Nations to local mayors, the way we are thinking about resiliency, sustainability, and future-proof infrastructure is changing. Awareness campaigns like Infrastructure Week are a great opportunity to keep the conversation going.

>> Discover how solar lighting can make your city more self-reliant

>> Explore other advantages of solar lighting for long-term sustainability