Carmanah Lights the Way with Python

This is a story about how Python’s elegant design can make the language useful in an unexpected way.

Carmanah Technologies Inc. (http://www.carmanah.com/) was conceived in the middle of the Pacific Ocean. The founder, David Green, was sailing his boat from Fiji, bound for Victoria, British Columbia. He was running low on battery power for his navigation lights, and had an insight.

The eventual result of that mid-ocean idea was the world’s first self-contained, fully autonomous marine navigation light. During the day, each device uses solar power to recharge its integrated batteries. The light then operates from the stored charge at night. In place of conventional bulbs, Carmanah’s systems use long lasting, high-efficiency LEDs. The overall result is an exceptionally rugged device, sealed against the elements and requiring no maintenance.

On occasion, lost Carmanah lights have drifted for thousands of miles upon the ocean currents, only to be recovered later — in full working order. This sort of reliability has made them famous amongst waterway authorities, sailors and the coast guards of various countries.

The technology born of the harsh marine environment has proven useful in many other areas, and today Carmanah is the world leader in solar-powered LED lighting. The company manufactures a whole line of such lights for a variety of different uses, including transit, roadway, railway, industrial markers and airfield illumination as well as the original marine application. The lights are sold all over the world, and must often with stand extreme conditions (the open ocean, desert climates, the far north, urban vandals, etc.). Carmanah’s lights have even been the subject of a documentary on national television. 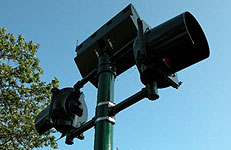 Closeup of a Carmanah crosswalk traffic beacon, a recent product in which Python has played a significant role. The enclosure at the top of the pole is oriented towards the sun, to better expose the solar panels that it carries on the front. The antenna for the wireless link to a similar unit on the other side of the street is visible at the left side of the enclosure.

Electric lighting has become so commonplace, it seems like a simple idea. An autonomous, self-contained light, however, turns out to be a complicated thing indeed. The amount of usable solar radiation varies with the weather, the seasons, one’s position on the earth, and the orientation of the solar panel. The battery state of charge must be carefully managed to ensure long life and correct operation. Available power has to be monitored, and possibly rationed through the night.

Depending on the application, the light may also have to be programmable to emit internationally recognized flash codes, react to user input, etc. In even more complex situations, wireless networking is required to allow the lights to communicate with each other, or with a central base station.

A great deal of mechanical, electrical, electronic and optical design is required to create these lights. As is typical of modern complex devices, an embedded software program running on a microcontroller operates each unit, making it come to life. Like a miniature version of the Monolith from 2001: A Space Odyssey, each light maintains itself, ready to perform its function whenever the need arises.

The Future of Practical Computing

Current practical computer applications are dominated by the PC. Yet, just like the mainframe before it, the PC will lose its central place in the use and deployment of computer technology. Embedded systems — computers that are part of other devices — will be the most prevalent in the future.

The mainframe is far from being obsolete today, and the PC will likewise remain important. Most computers, however, will be incorporated into something else, rather than standing alone. This process has already begun. Automobiles employ multiple embedded systems, some of which communicate with each other. Embedded systems also operate many household appliances. Such systems are likewise very important in industry, where they form a crucial element of many instruments and tools.

The catalyst for the future expansion of embedded systems is the rapid advance of network technology. As the hardware becomes less expensive, smaller, faster and more efficient in the use of electrical power, networks of embedded devices will proliferate and grow. Such devices — in collaboration with one another — will control homes, offices and industrial facilities. Preparations for this new world of computing are underway now, as evidenced by the Cambridge-MIT Institute’s Pervasive Computing initiative (see http://oxygen.lcs.mit.edu/). The initiative has also been covered in a BBC story (see http://news.bbc.co.uk/1/hi/technology/3583479.stm).

The emergence of Pervasive Computing will make it necessary for each system to be very low maintenance. When every user requires hundreds of devices, it is simply not feasible to service them all on a regular basis. Of course, fully self-contained systems that manage their own power would be ideal, because changing batteries or attaching wires is a serious challenge if it needs to be done on a large scale. Thus, the miniature Monolith becomes a swarm.

The Importance of Python

Large scale deployment of embedded systems demands inexpensive components. Considerations such as small size, high reliability and low power consumption are also very important. Specialized processor chips, called microcontrollers, have been developed to meet these goals. Combining CPU, memory and peripherals (such as UARTs) on a single chip, modern microcontrollers are marvelous devices. These features, however, come at a significant price. A typical microcontroller has only a few hundred bytes of RAM, several K of ROM (to store the program) and orders of magnitude less processing capability than a conventional desktop microprocessor. Hardly an environment for running Python!

There are projects to adapt Python for embedded applications, but they require significant resources on the microcontroller, and are still in the very early stages. Surprisingly, however, it turns out that standard Python is of tremendous value throughout an embedded system’s lifecycle. This is because the highly resource-constrained nature of embedded devices make them dependent on standard PCs for many tasks — both during development and during deployment.

For example, embedded software is compiled on conventional desktop systems, and the resulting object code is then loaded onto the target microcontroller. Another example is troubleshooting a device in the field, which usually requires additional hardware to run a diagnostic utility. Ordinary laptops are a very attractive platform for this application, due to their ready availability and relatively high level of standardization.

Thus, a major part of any embedded software development effort is writing the required support code, to run on a standard PC. There are quite a few languages available for this task, but the advantages of Python are many. Python is quite easily learned by people from various programming backgrounds, such as Java, C or Visual Basic. After becoming familiar with Python, development proceeds very quickly — perhaps faster than with any other language. At the same time, Python lends itself to the creation of highly readable, compact and well structured code.

Python’s particular mix of features also helps embedded developers be more effective when programming a PC. While these developers are well familiar with C (by far the most popular high level language for embedded systems) a C program written for a standard desktop or server is quite different in style from one for a microcontroller.

The compactness of Python programs is especially important, because embedded developers have, by necessity, learned to express their designs in a very small amount of code. Python’s automated memory management also helps, because many embedded developers have little experience with dynamic memory allocation — a technique that is not practical in most embedded environments. In addition, the Object-Oriented facilities of Python are simple, powerful yet not coercive. This allows embedded developers (who are often less familiar with OOP) to gradually adopt the Object-Oriented paradigm in their work.

As embedded systems grow in complexity, the advantage of using Python to augment traditional techniques becomes more and more important. At Carmanah, Python adoption (which began with the crosswalk traffic beacon, a sophisticated device that includes wireless networking) has spread to several key areas of the embedded system’s lifecycle.

A Python program controls the software build process, allowing firmware for different products to be put together from a large number of shared components. The build system is simple yet a lot more flexible than makefiles, as well as easier to customize, configure and extend. Unlike the build tools supplied by compiler vendors, the Python-based build system can work with different compilers.

Python is also used for stress tests and unit testing — an aspect of development particularly vital in embedded systems, due to the inherent difficulty of upgrading devices once they are in the field. Additional uses of Python, such as for control panels and code generation, are being considered as well.

One very exciting application of Python at Carmanah is in the role of a device simulator. A simulator can act as a node in an embedded network, while displaying the internal system state via animated images on the screen. Simulators are very valuable during the early stages of an embedded project, when little actual hardware is available. By taking the place of missing devices, simulators can allow software development to continue even before the hardware design is completed.

Here is an illustration of the usefulness of Python in embedded development. A prototype of Carmanah’s crosswalk traffic beacon interacts with a Python-based simulator running on an ordinary PC. The simulator effectively completes the system, because two traffic beacons (one for each side of the street) are required in a crosswalk installation. In addition to significantly accelerating development, a Python-based simulator can easily animate drawings, as shown. This allows meaningful demonstrations of the system much earlier than would otherwise have been possible.

At Carmanah, Python has been used not only by experienced engineers, but by student interns as well. Even interns with little prior programming experience can accomplish quite a lot with Python, while requiring less supervision than other languages demand.

The exciting work of creating self-contained, autonomous devices continues at Carmanah. As the swarm of micro-Monoliths becomes reality, the importance (and complexity) of the embedded software grows. By making such software much easier to develop, test, control and deploy, Python is really lighting the way to the future of computing.

George Belotsky is a software architect who has done extensive work on high performance Internet servers as well as hard real time and embedded systems. His technology interests include C++, Python and Linux. George Belotsky has written a number of articles (see http://www.oreillynet.com/pub/au/1204) including a series on Python and Network I/O. He is also the author of the Flightdeck-UI open source project ( http://openlight.com/fdui/). You can reach him at questions@openlight.com.