The star-filled sky above Lake Havasu in Arizona may be beautiful, but the stars don’t provide enough illumination to help boaters safely navigate the lake’s curves and bends. Solar-powered Carmanah LEDs from Premier Materials sit atop replicas of American lighthouses along the shoreline to light the way.

Bob Keller and his friends, mostly retirees, are lighthouse aficionados. They were already working on a 17′ tall lighthouse for the entrance to the Lake Havasu marina when reports of maritime accidents on the lake began to increase in the spring of 2000. This inspired the group to begin a campaign to place navigational lights around the perimeter of the lake and around the island in the middle of the lake. It was only natural that they build more lighthouses to house each light.

“That first lighthouse was really the inspiration to do more,” Keller said. “And we thought it would be a good idea to replicate famous lighthouses from across the country to get more people interested.” 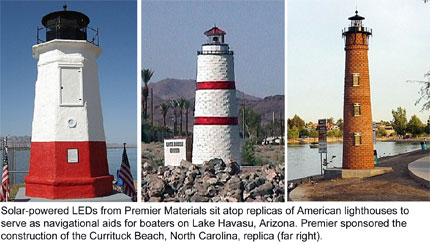 Each structure costs around $4,000, including construction materials and maintenance. Keller and his group incorporated themselves as a non-profit organization, The Lighthouse Club, to help them raise the necessary funds for each lighthouse. All structures have been sponsored by families, businesses, organizations, and even by auxiliaries of the US Coast Guard.

The first Lake Havasu lighthouse was built around an existing light pole using 110v electricity for power. But since most of the future lighthouses would not have electrical access, Keller had to find an alternative. He decided to follow the example of the Arizona state parks, which use solar-powered LEDs. Unfortunately, the cost of the lights proved prohibitive. Keller did research and discovered Carmanah Technologies LEDs and their American distributor, Premier Materials.

Keith Boulais, company president, was intrigued by the club’s vision and impressed with their workmanship. He and Keller forged an agreement for Premier to supply the Lighthouse Club with model 701 solar-powered LEDs. “The Lighthouse Club is really doing a great job promoting boater safety,” he said. “Their craftsmanship and attention to detail is amazing.”

Premier also sponsored a replica of the Currituck Beach brick lighthouse, which is on the Outer Banks in North Carolina. The original lighthouse stands 162′ tall and was built in 1875. Its replica stands 21′ tall and sits at the southeast corner of the Bridgewater Channel.

With most of the replicas, Keller and his group work off copies of the original’s building plans, including being able to imitate the color of the beacon and its light sequence, which is unique to each lighthouse. This way, the club can get as many of the details exact and to scale. The 701-series LEDs from Premier come in four colors, and multiple flash sequences, which enables the replica to work like its original as well. Because Lake Havasu and the Colorado River are both federal navigable waterways, the beacons conform to USCG standards.

Because Lake Havasu lies between Arizona and California, The Lighthouse Club wants to place replicas from the East Coast on Arizona shores. Replicas of West Coast lighthouses will sit on California shores, and lighthouses from the Great Lakes will ring the island.

Eleven buildings have been dedicated, 10 of which are either on the island or on the eastern bank of the lake. Thus far, only one lighthouse, the Table Bluff, has been placed on California’s side of the lake. The Lighthouse club has identified 35 priority sites.

Information about the Lake Havasu lighthouses is available at www.lh-lighthouseclub.org.

This sales update was provided by Premier Materials Technology, a Carmanah Authorized Distributor.