Victoria Company Lights Up the World with LEDs 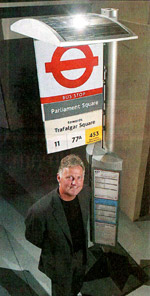 A remote urban bus shelter. It’s late, dark and raining. You press a button in the solar-powered shelter and the schedule is illuminated by tiny LED lights, just like those sparkling new ones you used on your house last Christmas.

The last bus will be here in 10 minutes. You resist the impulse to pull out your phone and call a cab. Instead, you push a button on the shelter. A second set of LEDs emits a pool of light bright enough to read your paperback.

A wind kicks up. The rain continues and out there a bus approaches. Your finger hits a third button, it sets a bright LED light to signal the driver. Yes, he sees that you’re there. You’re safe.

This little scenario was made possible by Victoria’s Carmanah Technologies. It could have taken place in London, in Chicago; in Atlanta, Ga., in Pierce County in Washington state or in the Lower Mainland. Those are just some of the places where Carmanah’s LED-lit, solar-powered bus shelters are in place. In fact, they’re being tested right now in 60 North American cities.

It is this – and its similar LED products used for marine navigation, airport lighting, street signs, automated crosswalks and even home numbering – that won Carmanah the British Columbia Technology Industries Association award for best application of technology for 2004.

“It’s been quite an interesting adventure,” said Carmanah CEO Art Aylesworth. “Our founder David Green… was a sailor. And he was aware of the needs of lighting channels, marking hazards and so on at sea.”

Green saw the potential of LED lighting linked with solar power. for marine navigation. The LEDs would provide the light and the solar panels would mean the lights would constantly have power with no maintenance.

The United States Coast Guard bought its first Carmanah light in March 2000. With these, the annual maintenance costs for a navigation marker fell from as much as $50,000 US to zero.

“We’re really good at getting an awful lot out of a small solar panel and being very miserly about how much we let our batteries discharge to the lights to get the desired brightness,” said Aylesworth.

For example, the bus shelters were first designed for London, England. And that, said Aylesworth, had to be the gloomiest place they would ever be used, meaning that the solar panels would have very little energy to store.

“But the people in London wanted the shelters unbelievably bright,” said Aylesworth, who added that solving the London problem meant the shelters could be used anywhere in the world. “Now our lights literally think their way through the winter. They might just dim themselves through difficult times and then come back up as the solar environment improves. This means they get through the difficult times, as opposed to just quitting.”

While the initial cost of such Carmanah products as the marine lighting is cheaper than traditional technology, the bus shelters are a little more expensive.

“The big advantage comes when they have installed it,” said Aylesworth. “If they have to break 10 feet of concrete in order to get power it’s terribly expensive.”

And the cost saving in power, once the shelter is in place, is somewhere between $40 and $60 each annually.

Aylesworth said he believes that a major Carmanah advantage in the market is that it got involved with LED and solar power before it became fashionable.

And so we learned an awful lot because LEDs are quirky. They work all the way from high voltage to very low voltage.

“They’re odd ducks and when you treat them with a different amount of currenct they produce varying degrees of heat,” Aylesworth said.

And the more heat, the less efficient the lights become, which is a problem because of the limited power that can be produced by solar generation.

“So we’ve become experts at driving low current and getting high performance from LEDs,” said Aylesworth.

Aylesworth said the company is just now starting to become profitable, but has to balance that with the need to develop its technologies.

“We have been very diligently managing not to be a money-losing company that also puts lots of cash into new business development, new product development and new markets.”

These days, said Aylesworth, Carmanah is considering partnerships with the likes of GE Lighting and 3M.

“3M in Europe would like us to partner and do solar-powered roadway signs using their reflective technologies and their great distribution base.”

Recently, Carmanah made its first move into the consumer marketplace with a solar-powered address sign.

Carmanah is also mulling over how best to get the signs to market. As well, Carmanah is considering getting into the area of making solar engines for applications other than LED lighting.