Located at the junction of two major U.S. highways, the city of Midlothian, TX is a place thousands of people pass through every day on their way between Dallas, Fort Worth, and the rest of the state. As such, much of the city’s infrastructure is friendlier to vehicles than it is to pedestrians.

But when the First Baptist Church (FBC) of Midlothian opened its new student center across the road from its main location in 2017, they knew they needed a way to get people, many of them young children, across the street visibly and safely.

The project manager for the student center building contacted several agencies for advice on getting a crosswalk built. One of them recommended MoboTrex, one of Carmanah’s Texas distributors.

MoboTrex travelled to Midlothian to survey the site of the planned crosswalk, which is situated along a four-lane road with a 40-mph speed limit. Additionally, the crosswalk approach involves a curved road, meaning sight lines in one direction are limited.

While the project manager had initially considered a simple three-unit crosswalk (two RRFBs positioned at the roadside, and one dual-sided unit on the median), MoboTrex Texas Sales Manager Cameron Cooper recommended a more robust Carmanah solar-powered RRFB system to help overcome high travel speeds and limited visibility on the approach.

“After reviewing the intersection, I recommended they add early warning emitters at 200 ft. from the intersection on both approaches,” says Cooper. “In addition, to compensate for the possibility that people may be on their phones or otherwise distracted when crossing, I suggested they add MS Sedco pedestrian sensors to ensure RRFB activation.”

The results of an Energy Balance Report (EBR) by Carmanah showed that two smaller solar-powered R920-E RRFBs would work for the two early warning emitters. At the crosswalk itself, three cabinet-based and solar-powered SC315 RRFBs were recommended to power the radar sensors (ADA-compliant pushbuttons were also added to all three poles). 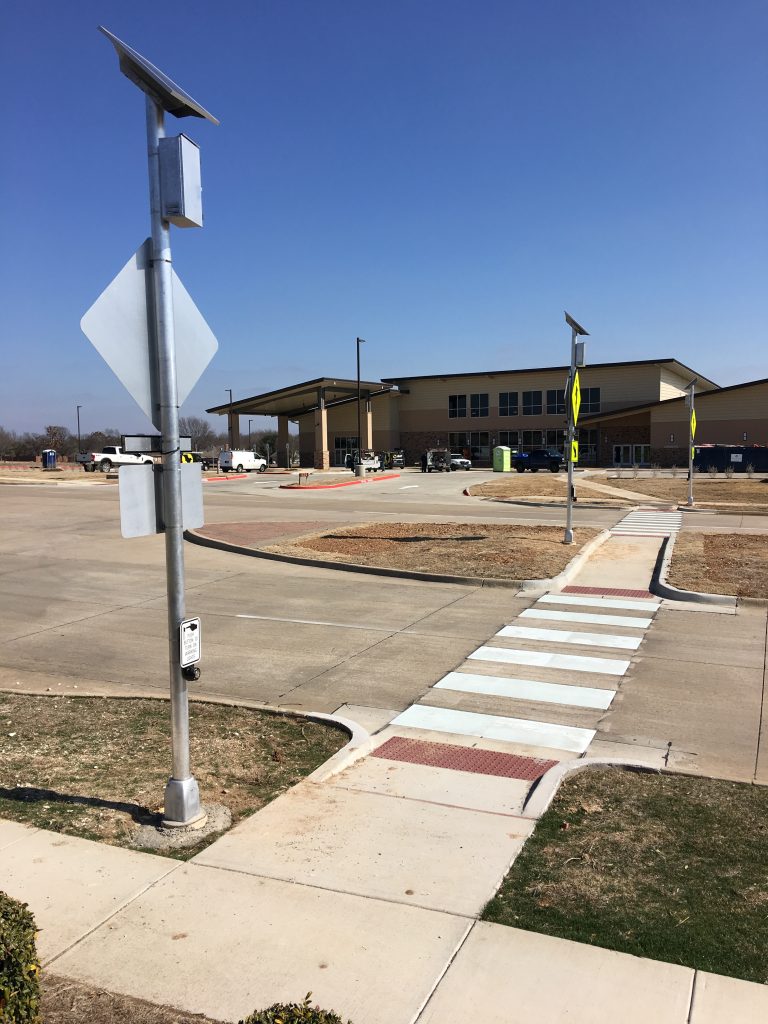 FBC’s new crosswalk is a model of pedestrian safety and accessibility in a high-traffic, high-speed location.

While Carmanah’s ultra-bright LED lightbars are proven to capture drivers’ attention at a distance in all types of weather, the addition of early warning emitters elevates awareness and compliance further. And, by opting to include passive detection, the City has effectively ensured RRFB activation regardless of action by the pedestrian. (Passive detection has the added benefit of extending the flash duration so long as a pedestrian is detected within the crosswalk).

According to Cooper, “The solution provided by Carmanah/MoboTrex exceeded their expectations, providing the customer with a solution that was effective, complete, and more detailed than their initial desire.”

Watch the video below for a bird’s eye view of the new crosswalk installation: