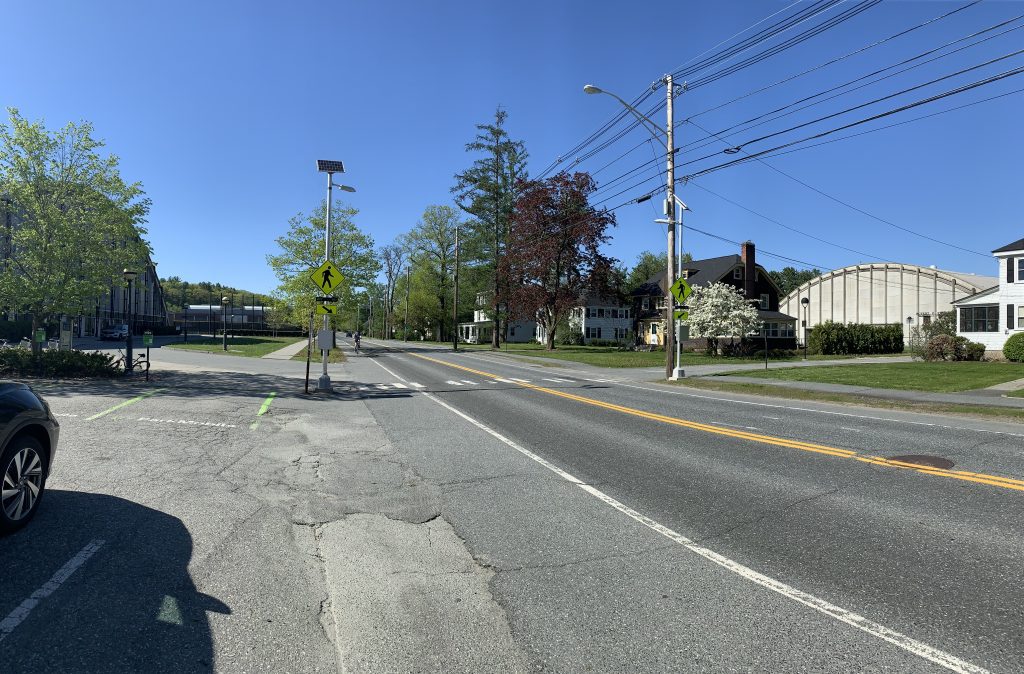 In many ways, the town of Hanover, NH, is a pedestrian paradise. The downtown core is compact and accessible. The campus of Dartmouth College, which occupies half a square mile of the town’s five-square-mile total area, is transected by small-scale streets and pedestrian-only pathways. The Appalachian Trail runs straight down Main Street.

Even so, Hanover has not been immune to the plight of pedestrian/vehicle collisions that have become endemic across North America.  One report commissioned by the Town recorded 25 incidents involving a pedestrian over a 10-year period, five of which occurred within a marked crosswalk.

To combat this issue, and to ensure that Hanover continues to enjoy significant levels of walking (37.9% of people walked to work in 2017), local officials have committed to making a number of pedestrian infrastructure improvements, including midblock crosswalks, high-visibility signs, flashing beacons, and overhead lighting.

One of the streets flagged for improvements in Hanover’s 2012 Bicycle and Pedestrian Master Plan was South Park Street, a cross-town thoroughfare with an annual average daily traffic (AADT) of 10,000, as well as substantial volumes of pedestrian and cyclist traffic. Many of Dartmouth’s athletic facilities are located along the street.

The Town has been working to gradually improve safety along South Park Street for the past decade, including the addition of sidewalks and advisory bike lanes on both sides of the road. Painted midblock crosswalks, roadside and in-road signage have also been added at key pedestrian generators.

But they knew still more had to be done. “In a busy college community, with thousands of crossings daily, it is imperative we provide as much warning to drivers as possible while still allowing traffic to move through our community,” said Hanover Director of Public Works Peter Kulbacki.

To achieve that, they needed an eye-catching, effective, and compliant crosswalk system that could provide high levels of pedestrian visibility and driver awareness both during the day and at night, when many people would be attending sporting events at Dartmouth’s hockey arena and soccer fields. That’s where we came in. 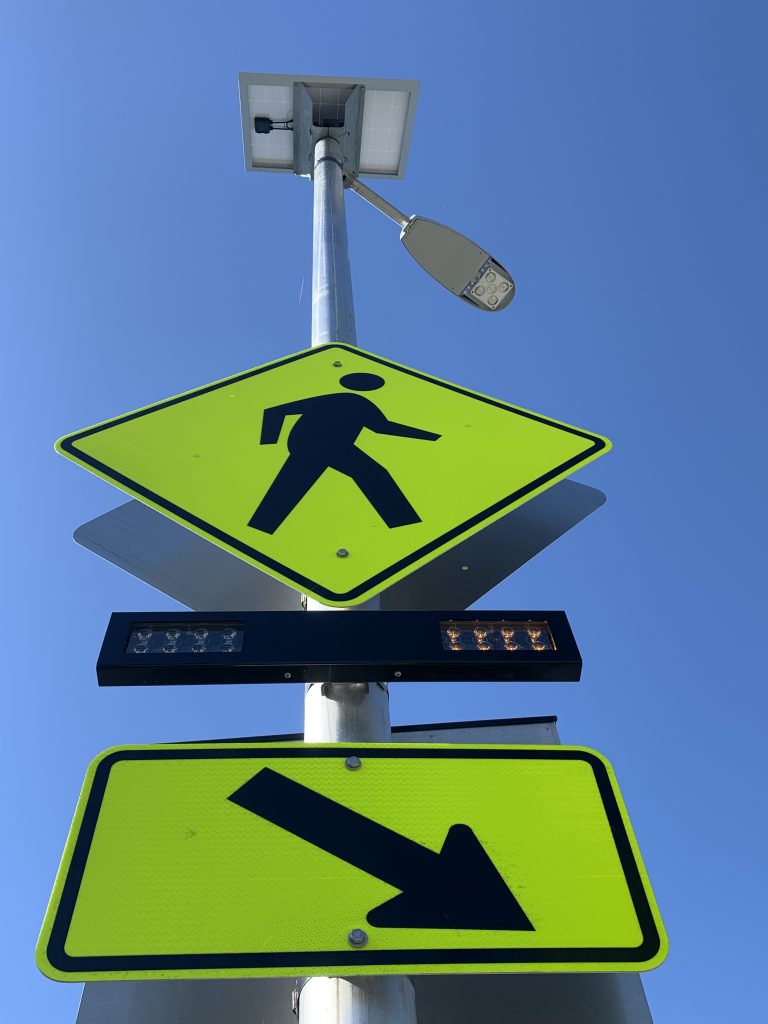 Hanover was no stranger to Carmanah’s solar-powered rectangular rapid-flashing beacons, having worked with Coastal Traffic to install them at several uncontrolled crossings throughout the town. What’s different about the system installed on South Park Street is that includes not only the high-intensity flashing light bars, but also a purpose-build overhead light fixture, something the town—and the FHWA—recognizes as a key component of pedestrian safety.

The first-of-its-kind system, which was installed in front of Dartmouth’s 3,500-seat Thompson arena, includes two poles, each equipped with our SC315-G cabinet, 80W solar panel, amber LED light bar, ADA-compliant pushbutton, and Cree Type 3 roadway light fixture. This high-efficiency light provides continuous, uniform, and directional illumination of the pedestrian and the entire crosswalk area without the kind of hazardous glare and “spilled light” that is typical of some lights used in this application.

When activated by a pedestrian, the LED light bars on the RRFB flash rapidly and erratically to alert drivers of an incoming pedestrian. “A system which only activates when a button is pushed provides greater driver awareness of pedestrians crossing,” said Kulbacki.

Since it was installed in late 2019, the new RRFB/overhead light system has helped thousands of pedestrians cross visibly and safely at this high-traffic location.

According to Coastal Traffic Senior Sales Engineer Paul Fellowes, it has also made the Town of Hanover a leader in a region that is demonstrating an increasing interest in pedestrian safety improvements.

“[The RRFB/overhead light] is an excellent addition to the portfolio of products that Carmanah and Coastal Traffic have been providing to Hanover for some time,” he said. “They have taken a leadership role in the region, and it’s exciting to see them assisting other stakeholders to adopt comparable technologies.”