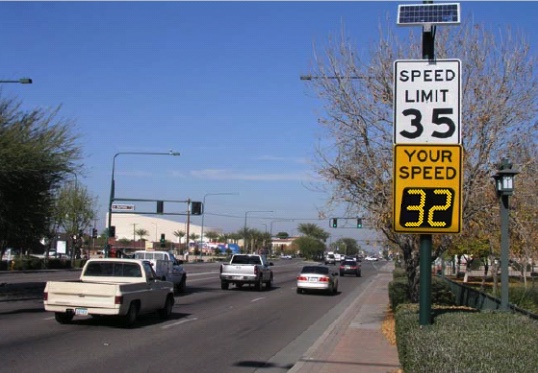 Overview: Intersection safety is a national, state and local priority. In recent years, an average of 22 percent of traffic fatalities and roughly 50 percent of serious traffic injuries occurred at intersections. Agencies are searching for solutions that avoid the public backlash often associated with photo enforcement programs.

Here is how the city of Chandler, Arizona, a Phoenix suburb coping with a population explosion, greatly reduced the number of traffic fatalities by 79% at their intersections.

Between 2002 and 2008, 65 people lost their lives in traffic collisions within the Chandler city limits. One in three of those deaths were collisions involving excessive speed, despite red-light photo enforcement installed at many busy intersections.

In search of a solution, the city launched a coordinated program including public awareness campaigns to ensure public acceptance. City traffic engineers widened the intersections, created left-turn lanes and dedicated right turn-throughs, and increased green time on the speed sensors. Police stepped up patrol visibility and direct traffic and DUI enforcement. They also added a “speed on green” photo enforcement program by installing SpeedCheck radar speed feedback displays ahead of 12 problem intersections to alert drivers to the appropriate speed.

“I wanted to make sure people have ample warning. If people slow down and don’t get a ticket, that’s a good thing, no matter what prompted them to do it.”
– Jeff Weninger, Chandler City Council

Cameras at these target intersections operate not only when a signal is ignored but also when the posted speed limit is exceeded. Drivers can now be cited through photo enforcement for both red light and speeding violations. To further inform the public, the city listed on their website the 12 intersection locations where photo enforcement cameras cover speed and red light violations.

Chandler got the results they were hoping for. In a year-long study:

The best news is the steep decline in traffic fatalities—79 percent fewer in 2008 than in 2002 despite far more congestion on the roadways. 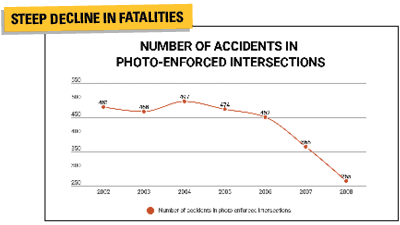