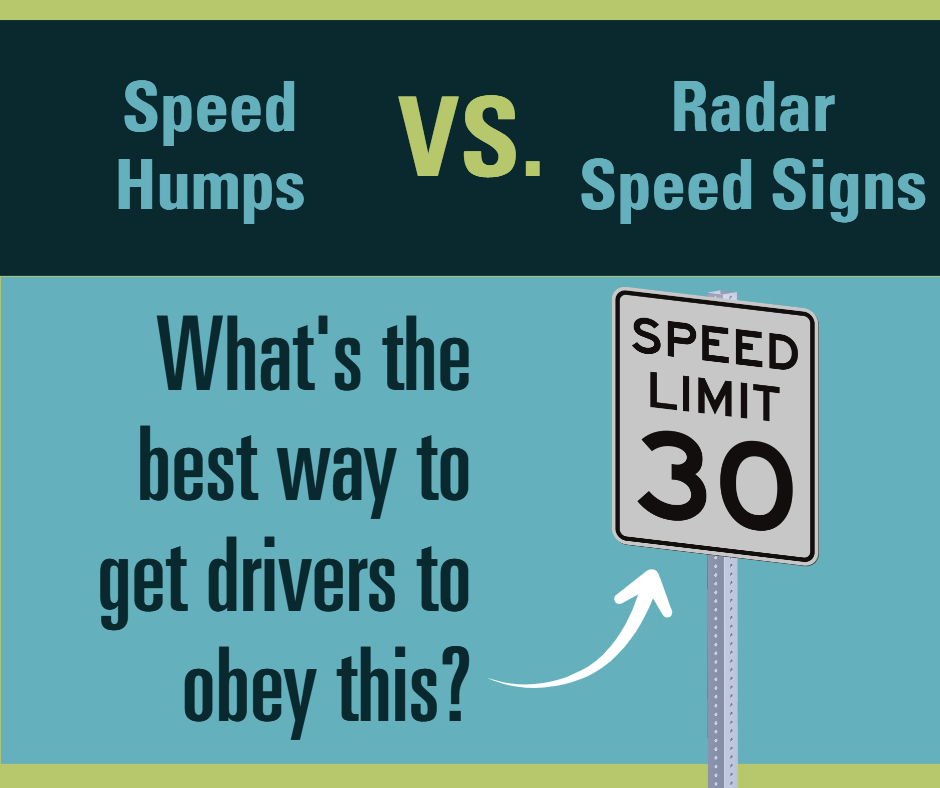 Traditionally, the speed hump has been a go-to solution for school zones and residential streets, but street narrowing, sidewalk extensions, and roundabouts are other options with a range of price tags attached. Most options can be tested out with temporary barriers for a minimal cost, but the permanent versions often require larger budgets. A less permanent solution is a radar speed sign, also known as a driver feedback sign, which can encourage drivers to see and acknowledge the sign, then self-correct their speed in response. 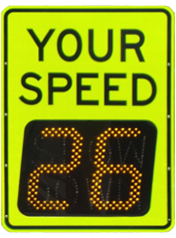 Both speed humps and radar speed signs are effective for traffic calming. The design of the speed hump necessitates lowering vehicle speed, or risking serious damage to the vehicle and injury to passengers. One study in Redwood City, California, found that the mean vehicular speed decreased by 17% after speed humps were installed, which resulted in a 43% increase in speed limit compliance. As the study notes, drivers may also begin to avoid routes with speed humps in favor of those without; if this is helping move vehicles out of residential areas and onto more appropriate collector roads adjacent, then this isn’t necessarily a bad thing.

Meanwhile, radar speed signs can slow down traffic in a school zone by as much as 9 mph, according to this study from the Texas Transportation Institute; several studies have seen reductions of around 5 to 9 mph. In Chandler, Arizona, radar speed signs installed ahead of 12 problem intersections helped reduce the average speed by 4 mph. As a result, 79% fewer traffic fatalities were reported, despite an overall increase in traffic within the city between the “before” and “after” measurements.

Neither traffic calming device requires police presence, since both speed humps and radar speed signs encourage drivers to self-correct their behavior. This helps the police force save money and time, allowing them to focus on other hands-on tasks.

“There is no question that radar signs enhance safety in the community. These signs are a cost-effective means of getting people to police themselves. They are relatively inexpensive considering the work they do to improve community safety.”

Radar speed signs can be tested out to determine their necessity in a location. The signs can gather traffic data without requiring the display to be turned on—meaning they can be installed to measure current speeds as part of a traffic study in that location. If speeds are high and decisionmakers deem it necessary, the radar speed signs can be activated to display speeds to drivers as they pass, hopefully encouraging them to slow down if needed. On the flipside, if the study doesn’t reveal a necessity of installing the sign in that location, it can easily be removed and the test repeated in a new location.

Speed humps also require extensive studies to determine their necessity and the specific location for placement, but they also cannot be moved once installed, meaning that if the speed hump proves ineffective in a location, it cannot be picked up and moved to another. While temporary speed humps are an option that may be relocated or removed as necessary, this may not always be practical. Furthermore, temporary speed humps are often made of plastic or rubber, which may break or warp over time.

Regarding the MUTCD’s recommendations for placement and design, speed humps and speed bumps are not included, since these are considered “physical features” rather than traffic control devices. The Institute of Transportation Engineers does public technical guidance, while many cities and counties also develop their own requirements. Radar speed signs—called changeable message signs—are included in Chapters 2B and 7B. 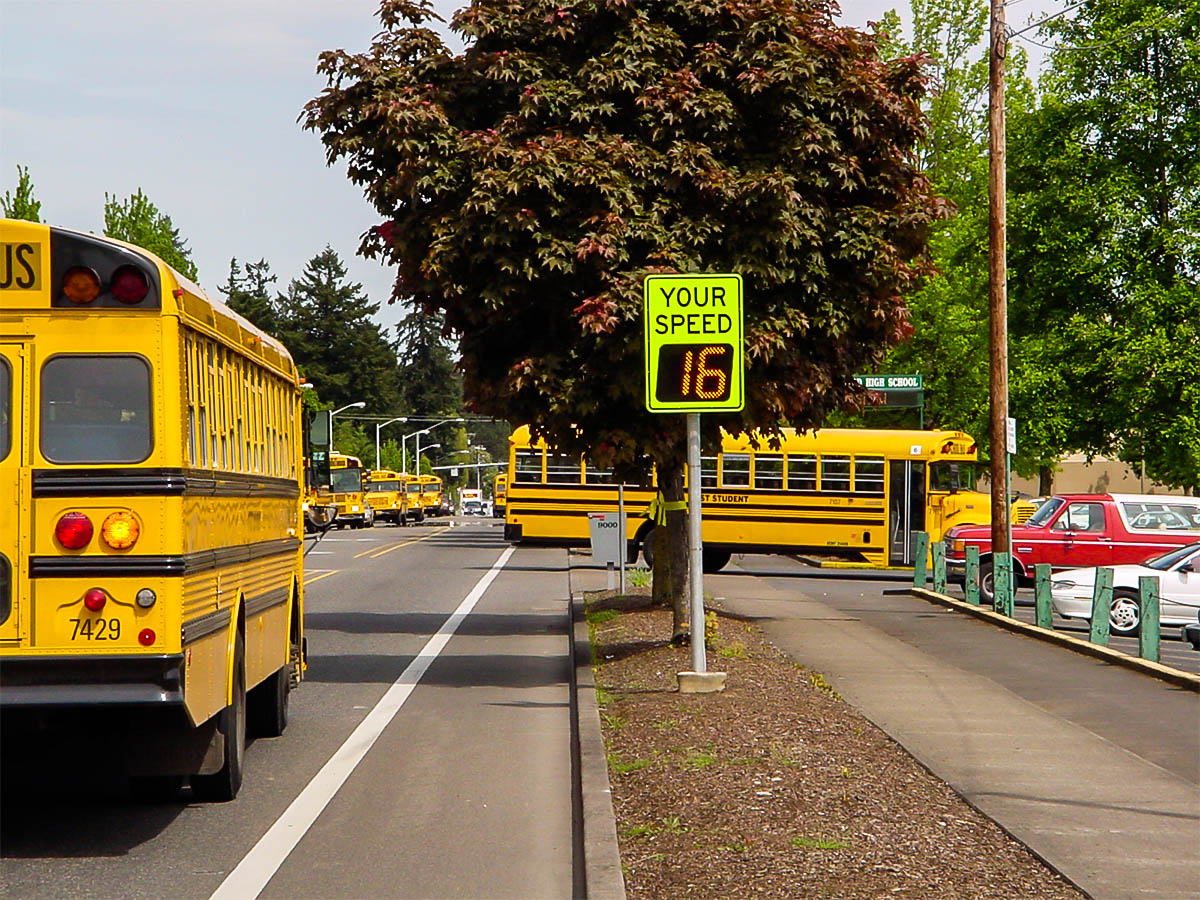 Speed humps require road-blocking installation, annual maintenance, and upkeep. Nearby homeowners may report the increased traffic noise from vehicles revving, while drivers often speak out about the stop-start driving required. Speed humps can damage vehicle undercarriage incrementally over time, as well, especially if drivers are unable to see the speed humps due to lack of signage, paint, or reflective strips, or if the speed hump is underneath snow or debris.

Meanwhile, speed humps are often disruptive to emergency services, since many styles require even emergency vehicles to slow down to pass over. (Some newer versions, such as those with separated road bumps, allow wide-axel vehicles to pass without slowing.) Anecdotally, some cities have reported delays between 10 and 30 seconds per speed hump in emergency vehicle delays.

On the flipside, a radar speed sign does not impede the roadway with physical barriers. It also doesn’t require extensive equipment to install or maintain. Unlike speed humps, radar speed signs won’t be a problem during snow removal, either. In addition, drivers generally like them: in a study in Utah, 68.2% of drivers self-reported that radar speed signs are helpful or very helpful at informing them of their speed while driving, and 66.1% agreed or strongly agreed they are effective at causing them to slow down.

Some of the differences between speed humps and radar speed signs are summarized in the table below.

We have many resources available that cover how our solutions can fit into Vision Zero and traffic calming plans, among many other initiatives. Start exploring now.