An Overview of Rectangular Rapid Flashing Beacon Cost and Effectiveness

Summary of RRFB cost and effectiveness

We all want safer streets.

Never has road safety been a more pressing need as US pedestrian deaths reach a 28-year all-time high.

A 2018 Governors Highway Safety Association (GHSA) report identifies several factors, listed below, which have led to a 35% increase in pedestrian deaths within the past 10 years (1).

“The alarm bells continue to sound on this issue,” said GHSA Executive Director Jonathan Adkins. “It’s clear we need to fortify our collective efforts to protect pedestrians and reverse the trend” (2).

Here, the GHSA explains the leading causes behind the rise in pedestrian fatalities (1): 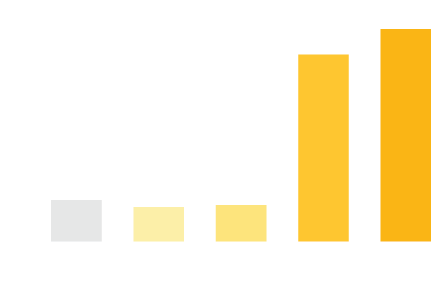 Recent studies verify, of the top three safety beacons, the rectangular rapid flashing beacon (RRFB) ranks as the most effective and cost-efficient crosswalk device on the market today. Tests prove the RRFB can heighten driver yield rates by up to 96% and reduce pedestrian crashes by 47% (3).

Installed at unsignalized intersections, mid-block crossings or roundabouts, RRFBs can be attached to poles of existing crosswalk signage. Beacons are synchronized to flash on either side of the road when activated by the pedestrian prior to entering the crosswalk. Studies find two beacons work well, however, safety margins improve with four or more RRFBs on roadways with heavy traffic or higher speed limits with multiple lanes (7).

The RRFB has a highly visible flash pattern with an ultra-bright, amber light that delivers a quick, irregular ‘wig-wag’ flash, similar to lights on emergency response vehicles. Drivers react sooner at the sight of a flashing RRFB, even under challenging conditions such as inclement weather, headlight glare, and limited visibility.

From the first Federal Highways Administration (FHWA) study in 2010 on a mid-block crosswalk in Florida through to studies conducted within the last nine years, the RRFB yield rate performs consistently better than alternate safety beacons by more than 75%.

Further, the FHWA’s 2019 Safe Transportation for Every Pedestrian initiative placed the RRFB first in its “Spectacular Seven” ranking of top-performing safety treatments for having reduced pedestrian crashes up to 47% (4).

Now free of patent protection issues, the RRFB is permitted for use by the Manual on Uniform Traffic Control Devices (MUTCD) with Interim Approval (IA-21). Also, RRFBs are a lower-cost alternative to traffic signals and pedestrian hybrid signals, according to the FHWA (3).

Summary of RRFB cost and effectiveness

This four-minute video explains how RRFBs work, why they’re so effective, and where best to install at your crosswalk.

What about other crosswalk treatments?

Next, we’ll look at other popular crosswalk treatment options and compare their effects on pedestrian crashes, driver yield rates, and their costs. 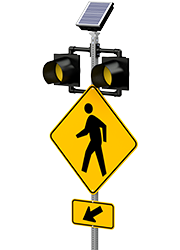 Like RRFBs, these beacons can be used to supplement crosswalk signs at marked, uncontrolled crosswalks, including urban mid-block crosswalks, trail crossings, roundabouts, and other pedestrian walkways.

FHWA research shows that installing a marked crosswalk without flashing beacons will not necessarily result in vehicles stopping for pedestrians. For safer crosswalks, consider the addition of flashing warning beacons to crosswalk treatments (3). 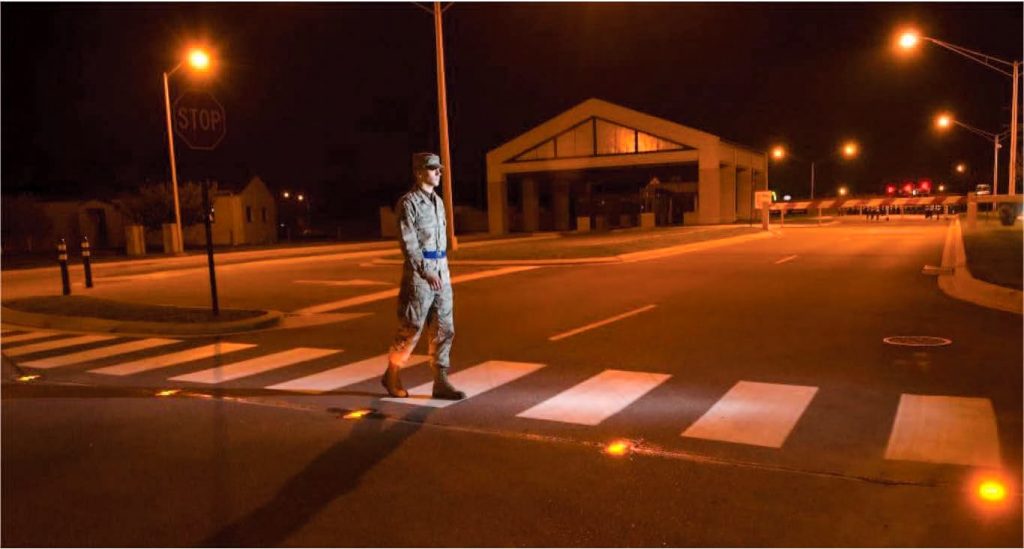 Also known as in-roadway warning lights (IRWL), these treatments alert motorists to pedestrians crossing at uncontrolled locations. Both sides of the crosswalk are lined with encased raised lights set level with the asphalt, some with LED strobe lighting, and facing towards the driver.

When pedestrians enter a crosswalk and the in-pavement lighting system is activated, research shows motorists’ speeds declined. The rate of yielding became less over time in some cases as drivers became more familiar with this crosswalk treatment.

Damage and malfunction issues with the lighting also remain a drawback. Several jurisdictions are removing in-pavement lighting systems due to unreliability, maintenance costs and ineffectiveness compared with other safety beacons. Also, drivers struggle to see the devices in daylight and the lights are also difficult to see when following other drivers.

Summary of IRWL costs and effectiveness 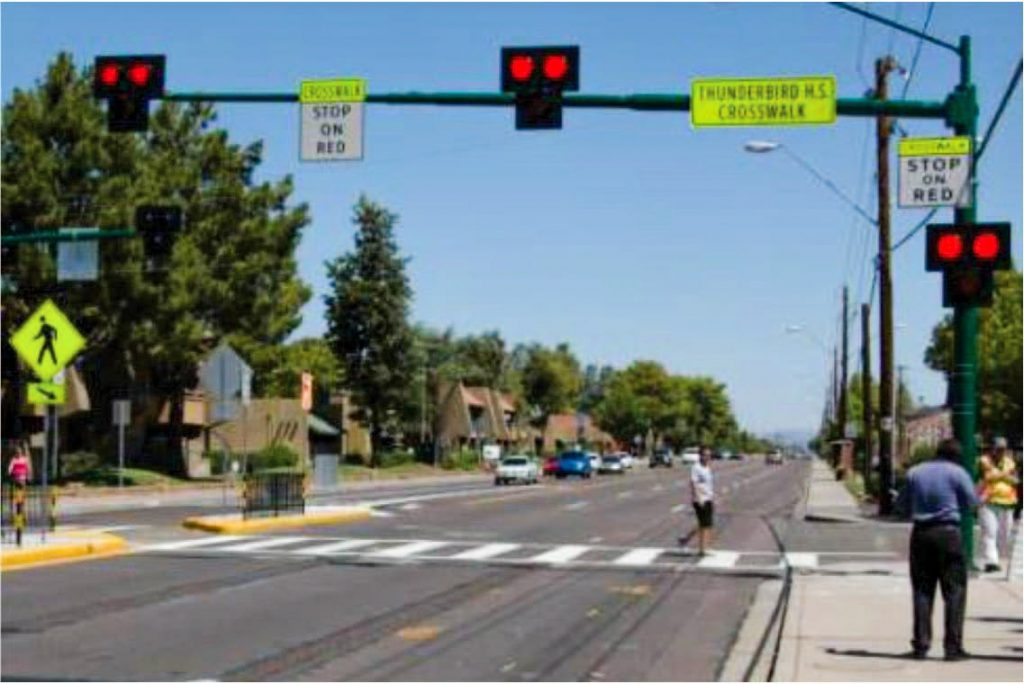 This traffic control device is designed to increase motorists’ awareness of pedestrians crossing at an uncontrolled marked crosswalk. The PHB* can only be activated by pedestrians when needed. PHBs are becoming increasingly popular with State and local transportation agencies and are useful in areas with limited yielding rates.

The PHB has significantly reduced pedestrian crashes by 69%, as published in a 2010 FHWA study. PHBs remain dark until activated which helps increase driver attention and can also reduce rear-end collisions (6).

This beacon is designed for mid-block crossing locations and is push-button activated by pedestrians as needed. The design consists of two horizontal red lights above a single yellow light. A brief flashing yellow interval is followed by a steady yellow interval, then by a steady red signal indicating motorists to stop. A Walk sign is lit to notify pedestrians to cross the roadway.

Summary of PHB costs and effectiveness

Who’s watching the roads? We are.

Designing and building highly-efficient solar or AC-powered beacons to maximize pedestrian safety within crosswalks is what we do at Carmanah Traffic.

We work closely with urban planners and traffic engineers to create sustainable, reliable traffic solutions that consider the needs of everyone on the road today including the driver, the pedestrian, the cyclist, among others.

Carmanah Traffic has a history of helping clients make the right safety decisions for their roads and intersections, plus we meet all MUTCD regulations, ITE requirements, and other essential specifications across North America.