Speeding continues to be a significant safety threat on today’s roadways. According to the National Highway Traffic Safety Administration (NHTSA), speeding killed 9,378 people in 2018, and has been a factor in a third of all crash fatalities for more than two decades.

Although there are a number of tactics aimed at slowing traffic—posted speed limits, police enforcement, speed humps, and more—creating lasting change has long been a challenge for transportation planners and engineers.

This is where radar speed signs shine. Typically installed along streets near schools and parks, and in areas with high volumes of foot/bicycle traffic, radar speed signs have become a popular and effective solution because they raise driver awareness and reduce speeds not just for a few days, weeks, or months, but for years after they are installed.

What the research says

With the increase in use of radar speed signs, a number of studies have looked at the impact of the technology on driver behavior in both the immediate and long term.

In 2002, the Texas Transportation Institute (TTI) undertook a four-month survey of seven sites where radar speed signs had been permanently installed, including a school zone, sharp horizonal curves, and approaches to signalized intersections. Researchers found that after one week, radar speed signs slowed traffic in school zones down by 9 mph—and that these results held up four months after installation. 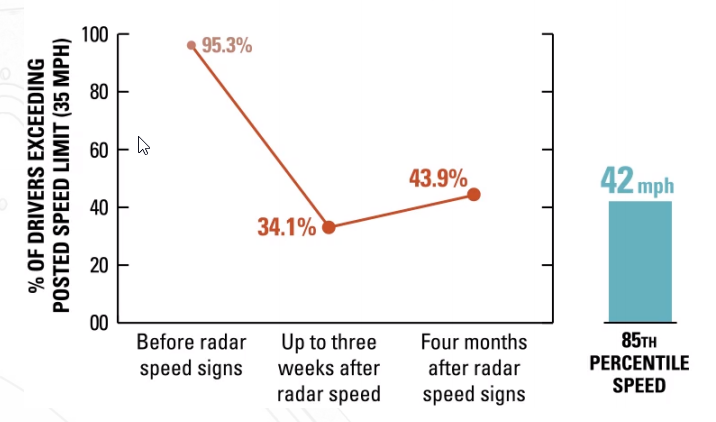 Another study (Hildebrand et al., 2014) extended the length of their survey, measuring speed reduction through school zones one week, two months, one year, and four years after installation. The before/after results indicated that “sustained and statistically significant reduction in the average speeds ranging from 5-14 km/h (3.1-8.7 mph) were achieved.”

And most recently, between 2013 and 2018, a group of engineers from the City of Campbell, CA ran a study of 10 locations outfitted with radar speed signs, finding mean speed decreases of 0.8 mph after one year. In their article for the ITE Journal, they wrote, “Speed generally decreased and did not creep back to the original ‘before’ speed.”

While speed reduction numbers like these might sound small, even a miniscule reduction in speed can mean a substantial decrease in the risk of injury or death. According to a study from the AAA Foundation for Traffic Safety, a person walking, rolling, or biking is twice as likely to be killed if they are hit by a person driving 30 mph than someone going 25 mph.

The World Health Organization (WHO) has also stated that a five percent reduction in average speed can result in a 30 percent decrease in traffic fatalities.

The City of Chandler, AZ has experienced this first-hand. After installing 66 of Carmanah’s “YOUR SPEED” radar speed signs at 12 problematic intersections, they noted a drop in travel speeds of an average of 4 mph at the end of their one-year pilot project, as well as a 79 percent decline in traffic fatalities.

We have a variety of resources available on traffic calming in general and radar speed signs in particular. Click the buttons below to start exploring, and don’t hesitate to get in touch with our team if you have any questions.