PORTLAND, Oregon – In 2007, The City of Mt. Vernon, Washington installed eight SpeedCheck™ radar speed signs at school zones throughout its jurisdiction. This brings the number of units employed by the city to fourteen and reflects the success that the technology has had in increasing child safety since the city first began using radar speed signs in 2005. 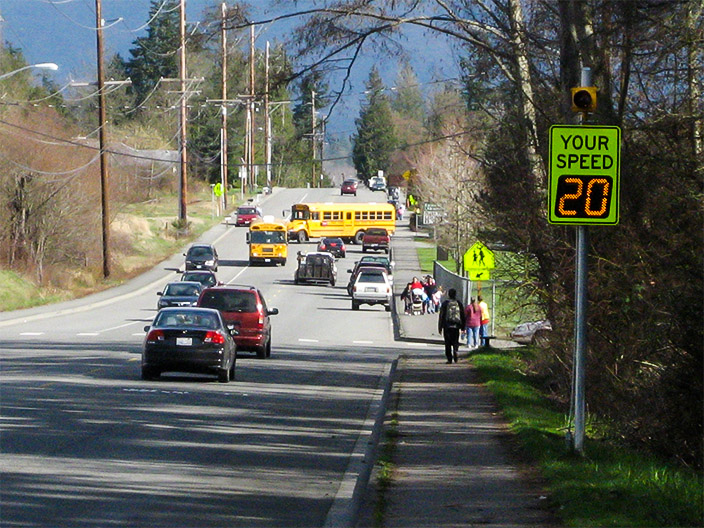 According to city safety experts, the radar speed signs offer several features and capabilities that make them significantly more effective than traditional school zone signs. The unit’s highly visible display, scheduling capabilities, and traffic data collection features have all been employed by the city in its efforts to slow traffic around schools and playgrounds during critical school hours.

SpeedCheck signs are specifically designed to slow traffic around school zones, on neighborhood streets and other locations where speeding cars jeopardize the safety of pedestrians and other motorists. The high-visibility signs show drivers the actual speed of their approaching car and can be set to flash when drivers exceed a predetermined limit. An internal timer can be used to schedule automatic speed limit changes based upon time of day. The MUTCD-approved display uses UltaClear™ contrast enhancement technology to maximize the visibility of the display.

“The City felt that a large percentage of motorists had become numb to the typical black on yellow school zone signs, so we decided to replace those with signs that have a fluorescent yellow-green background with black legend and border. The speed display signs fit perfectly with this new color scheme,” said Dean Gilbert, Public Works Inspector, City of Mount Vernon. “We also installed amber LED lights above the speed limit display that flash in conjunction with the display when approaching cars exceed the limit.”

The flashing lights remind speeding drivers that they need to slow down, and also create a self-enforcing environment.

“We’ve noticed that most motorists react instantly to the flashing lights,” said Gilbert. “Apparently they do not want to be seen by others as lawbreakers.”

In 2005, the city purchased its first two SpeedCheck signs, which they mounted on trailers to use at various sites on a rotating basis. The city soon decided to permanently mount signs at specific locations and, over the next two years, began purchasing and installing additional signs.

All of the SpeedCheck signs in use by the city are solar-powered. Eight of the units are equipped with traffic data collection capabilities that make it easy to assess the effectiveness of the signs.

“The statistics are clear,” said Gary O’Dell, president of Information Display Company, developers of the SpeedCheck radar speed signs. “The deployment of radar speed signs can have a dramatic impact on reducing traffic speeds, particularly near schools, playgrounds and on other residential streets. If an accident does occur, a slight difference in speed can make all the difference between a minor injury or a fatality.”