What is a Smart City? The Main Themes and Best Practices

The Smart City approach to urban planning was first introduced in the 1970’s by policy-makers in Los Angeles. As part of addressing increasing rates of poverty in the dense, urban center, L.A. planners used big data to drive their groundbreaking project “A Cluster Analysis of Los Angeles.” By the early 2000s, beliefs about Smart Cities had evolved into data-driven places synonymous with networks of sensors, surveillance, and wireless communications. Today, at the beginning of 2021, the Smart City movement has entered an era of technological, political, economic, and social debate. As well-intentioned as the concept remains, it lacks clarity and a standardized framework, particularly around prioritized, mutually agreed-upon outcomes.

The purpose of this article is to provide an up-to-date perspective on Smart City planning and highlight some of the best practices from around the world.

A Smart City is not created by simply keeping pace with advancements in information and communications technologies (ICT). Practices like improving cellular phone services or investing in the speed of fiber optic cables do not make a Smart City.

The making of a Smart City is intentional, and typically emerges from one of three different pathways:

This kind of thematic approach supports multi-dimensional Smart City planning. For example, if the aim is improving the system of public transportation, then each of these themes are integrated by planners working towards achieving Smart City applications. 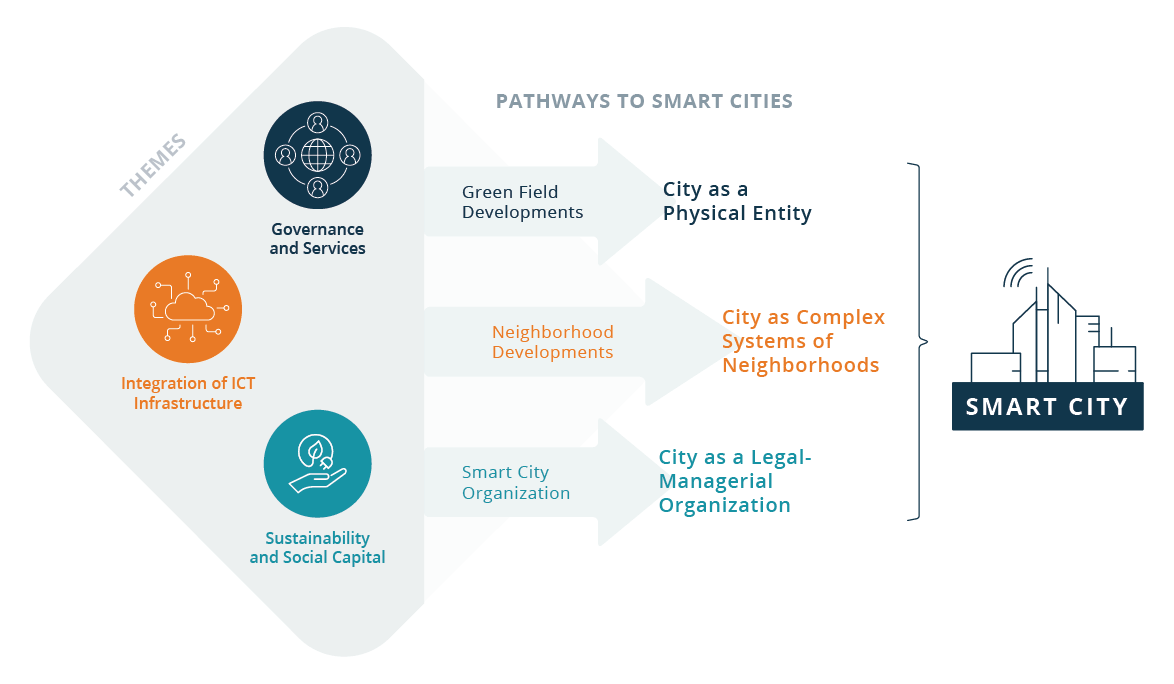 The objectives of Smart Cities are evolving and still debated, but the world’s leading organizations agree that a shift away from tech-centric policies and towards people-centric policies have become best practice. The Organisation for Economic Co-operation and Development (OECD) is at the forefront of human-centered Smart City approaches, and their opinion states: “While digital innovation remains central to the smart city concept, a key question is whether investment in smart technologies and digital innovations ultimately contribute to improve the well-being of citizens. A human-centric approach is considered key to make a city smarter.”

There is no doubt that an intelligent transportation system (ITS) is the central and prominent feature of the most efficient and admired Smart Cities. The collective process of reducing traffic congestion and carbon emissions, while making city roadways safer and more accessible to pedestrians and cyclists, makes the most meaningful impact on Smart City objectives. By implementing a range of ICTs and vehicle sensing technologies, an ITS has the capabilities to improve traffic flow, reduce congestion, and ultimately, save lives. ITS data is obtained and analyzed from multiple sources, including transit smart cards, web-connected traffic control devices, GPS, video, and regional social media posts. For example, by collecting roadway user data related to speed, travel time, and delay, urbanists are better equipped to create more livable, workable, sustainable spaces.

Smart Cities collecting and analyzing data from an ITS benefit from:

The Amsterdam Smart City likes to say that: “We are not just working on a smart city, but on a wise city.” They do this by putting people in the middle of everything they do with an ‘open innovation platform.’ Amsterdam’s innovators are thought leaders from diverse groups, including companies, public institutions, and local residents. With a community of more than eight thousand innovators, their open platform allows for public-private partnerships to form, while finding solutions for creating cleaner, greener, and happier urban spaces.

Since 1995, The Singapore Land Transport Authority has undergone a complete revitalization, relying heavily on Smart City themes and objectives. They have connected outlying areas by building 200km of rail, reduced urban congestion with 120 km of cycling paths, and connected the whole system of users through SimplyGo smart cards.

Both Smart Cities are centered on providing urban places that are livable, workable, and sustainable for their current, and future generations of residents.

Find out more about our Smart City applications

Safety Improvements Made on College Avenue Crosswalk in Appleton, WI