Spotlight on Orlando: Shifting from car-centric to multimodal design and mindset

What’s going on in Florida?

Like many regions in the Sun Belt, Florida’s Orlando metro area experienced significant growth beginning in the 1960s thanks to the advent of air conditioning and, later, a surge in retiring baby boomers, among other factors. As a result, much of the construction in the area was geared toward modern living—with open and airy architecture but transportation designed for cars alone. Living the American Dream was the goal for many people moving to the Sun Belt—and the population growth continues today.

Thanks to this car-centric design, in 2016, metro areas in Florida held eight of the top-10 positions in Smart Growth America’s Dangerous by Design report for most dangerous metro areas for walking in the United States. The report used a Pedestrian Danger Index, a calculation of the share of local commuters who walk to work in relation to the most recent data on pedestrian deaths. And the 2016 result wasn’t anything new: the 2011 and 2014 reports both listed Orlando, Tampa, Jacksonville, and Miami among the top-five most dangerous places to be a pedestrian or cyclist.

The state took the results of the 2011 report seriously and began making changes at that time. Complete Streets champion Billy Hattaway, then the District 1 Secretary for the Florida Department of Transportation (FDOT), was involved in implementing initiatives and was named “Public Official of the Year” by Governing magazine in 2014 for his efforts. “I led a statewide effort to improve safety for pedestrians and cyclists, and put into place Complete Streets policies and design criteria that will fundamentally change the FDOT approach to street design,” Hattaway told America Walks in 2016. Hattaway spent over 28 years with FDOT during three separate stints, but he joined the City of Orlando as Transportation Director in late 2016, hoping to affect change on a municipal level. 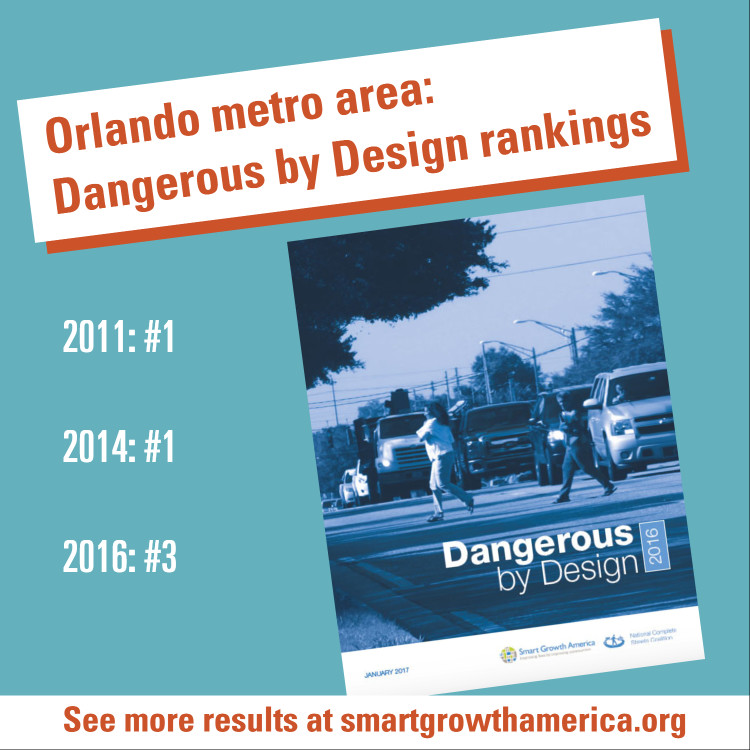 Despite efforts begun following its #1 ranking in the 2011 report, Florida’s metro area of Orlando-Kissimmee-Sanford remained at #1 in 2014 and still ranked third by 2016. City staff told the Orlando Sentinel that Orlando averaged about 121 crashes involving pedestrians per year between 2012 and 2016; cyclist crashes numbered about the same during that time. An average of 6.6 walkers and 1.6 cyclists died each year during that timeframe.

In response to the latest Dangerous by Design report, the city applied and was selected for the Safe Streets Academy, which provides technical assistance funded through the Road to Zero Coalition. In early 2018, the National Complete Streets Coalition worked with three cities for this project, building skills in safer street design, tactical urbanism, and community engagement. In Orlando, the city chose to work on Curry Ford Road, a commercial arterial road with a history of crashes involving pedestrians as well as cyclists. This demonstration project was in place throughout April 2018 and included a Bicycle and Pedestrian Safety Fair to showcase the temporary transformation of the Curry Ford Road corridor.

Despite public criticism from some road users, the experiment may result in redesigning other similar streets in the area. The results showed vehicle speeds were reduced: the number of vehicles traveling above the speed limit decreased by 53%, while pedestrian and bicycle activity on the corridor increased by 38 and 50%, respectively. At a new mid-block crosswalk, 89% of pedestrians crossing in the area used the crosswalk. Meanwhile, 55% of vehicles yielded, which is significantly higher than the 32% average yield rate for the Central Florida region. The results will be discussed at a community open house in August 2018.

What else is the City trying? The Transportation Department joined Vision Zero in September 2017, later that year adopting the goal of eliminating pedestrian deaths by 2040. An action plan is currently in the works. Orlando also partners with Bike Walk Central Florida, a local non-profit that is dedicated to safety for both pedestrians and cyclists. There is clearly a long road ahead, but the city is making progress: according to 2016 stats from local group Best Foot Forward, 60% of drivers are yielding on roads 35 mph and lower, which is up from just 17% in 2012.

What Carmanah can do for Florida

Carmanah Traffic provides a variety of traffic safety beacons to increase safety, improve walkability, and get drivers’ attention. For traffic products to be used on state highways, FDOT has a thorough process that manufacturers must follow when seeking inclusion on its Approved Product List. Several Carmanah Traffic products are on this list, and some have been on it for 10 years or more, proving that these beacons are meeting the department’s needs.

Since Orlando is already experimenting with mid-block crosswalks, adding flashing beacons to alert drivers’ attention can help improve yield rates. In 2018, FDOT received interim approval under IA-21 to use the rectangular rapid flashing beacon (RRFB) for mid-block crosswalks, and Carmanah’s R920 series and SC315-G RRFBs are both on the Approved Product List. For non-state highway system beacons, Orlando and many other cities across Florida have also applied for and received interim approval under IA-21 to use RRFBs to help reduce pedestrian deaths on all roadways.

Carmanah Traffic will be at the 2018 IMSA Forum and Expo, held this year in the Orlando metro area. Visit our event page for details on where to find our booth and learn about the opportunities in the Orlando area, across the state, and anywhere else where a traffic safety beacon could help make transportation safer for all road users.

What Is Traffic Calming?

New Generation of Solar-Powered Engines Are Ready for Your Project