Vancouver, BC may be Canada’s third largest city, but when it comes to walkability, it’s far and away number one. That’s according to data from Walk Score, which recently awarded the picturesque westcoast city of 2.5 million a score of 80/100, meaning it’s “very walkable,” and “most errands can be completed on foot.”

Though it’s easy to attribute Vancouver’s status as an eminently walkable city to its mild climate,  natural beauty, and lively neighbourhoods, a more important factor is the investments the City has made in infrastructure that encourages walking and other forms of active transportation. This has included the implementation of greenways, pedestrian-only zones, and accessibility improvements like curb ramps and audible pushbuttons.

Another initiative they have undertaken in recent years is the installation of rectangular rapid-flashing beacons (RRFBs), an alternative to traditional flashing beacons that use high-intensity flashing LED lights to capture drivers’ attention and increase yielding at uncontrolled crosswalks. In 2016, the City began testing them at three crosswalk locations, selected for their large pedestrian volumes and low yield rates.

One of the crosswalks identified for the RRFB trial was at West Boulevard and 42nd Avenue, a T-intersection that connects the Kerrisdale Community Centre, pool, and public library,  with the popular Arbutus Greenway (a paved rail-to-trail corridor that sees more than 2,500 users an hour).

Unlike the other two locations, where the RRFB could be easily positioned away from vegetation and shading, one of the poles at the West Boulevard site needed to be installed just a few metres away from a large oak tree that, at certain times of day, shed shade the entire crossing. This combined with Vancouver’s northern location—not to mention its famously wet winters—made achieving solar power difficult.

The West Boulevard site was also busy. While the other Vancouver sites typically saw 200-300 activations in a day, the West Boulevard location regularly experienced double that—as many as 700 some days. This made solar even more difficult, as more activations meant more power was required.

Initially, the City purchased an RRFB from another vendor and installed it at the West Boulevard site. “Very quickly the device was having power issues and we received many reports from citizens saying it was out of service,” said Liliana Quintero, a Senior Transportation Engineer for the City of Vancouver. “There were challenges getting enough solar power to support the above-average number of activations it was getting.”

Carmanah became involved in early 2018 when our local distributor, ATS Traffic, submitted a proposal to the City. The proposal included the results of an Solar Power Report (SPR), which took into account things the initial system had struggled with: solar insolation, shading, and operational requirements. The system Carmanah and ATS proposed, an SC315-G RRFB with two 80 W solar panels and 33 amp-hour battery capacity, was sized to perform as expected, even during the darkest months of the year.

“Carmanah provided us with lighting simulations to help us understand the actual solar needs of this location and what the right size of battery/solar panels were needed to keep up with the high demand of pedestrians,” said Quintero. 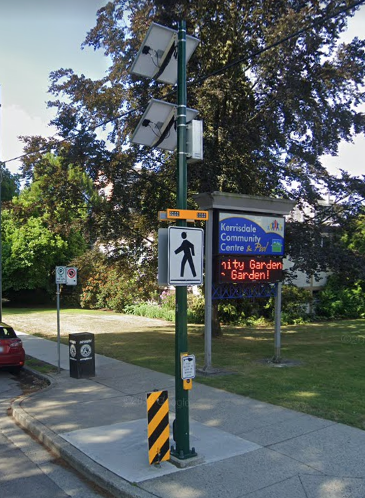 Since swapping out the old RRFB for a Carmanah system two years ago, the West Boulevard installation has operated “flawlessly,” according to ATS Traffic Account Manager Steve Henderson. “Feedback from residents has been very positive,” he noted.

From the City’s perspective, the new RRFB has had numerous positive effects. “Solar power at the location became more reliable and reduced calls from citizens of the RRFB failing,” said Quintero. “It’s also reduced time from our electrical operations crews spend attending the site to swap dead batteries for charged ones.”

And then there is the added safety. Over the three-year course of the pilot project that included the West Boulevard site, the City reported a that driver yield rates increased from 50% before the RRFB to an impressive 98% after.

With results like these, it’s no surprise Vancouver has plans to add more RRFBs, ensuring, no doubt, that it will remain the most walkable city in Canada for many years to come.