As city densification rises and roadways increasingly become multimodal, the term micromobility is often ambiguously linked to any light vehicle used for short trips. Further, in the U.S. it’s estimated that the total market for micromobility will grow to represent 8-15 percent of all urban trips under five miles, while reaching an economic value of $200-300 billion. In some regions the shift in transportation mode from cars to micro-vehicles is already much higher, which is contributed to regionally varying levels of motor vehicle use (See Table 1). In areas where car use is limited, the mode shift will be less significant.

But what exactly is micromobility?

The International Transport Forum (ITF) defines micromobility as “…the use of micro-vehicles: vehicles with a mass of no more than 350 kilograms (771 pounds) and a design speed no higher than 45 km/h.” Notably, this definition includes human-powered, battery-powered, and fuel-powered light vehicles, as bicycles, e-bikes, and mopeds are all considered forms of micromobility. 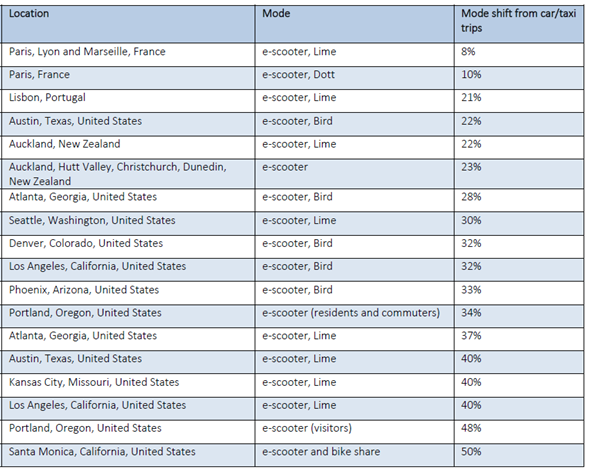 The range of micro-vehicles is diverse, a disparity which creates multiple challenges for urbanists and policy-makers aiming to improve roadway safety and reduce congestion. In their 2020 report on ‘Safe Micromobility,’ the ITF proposes four classifications of micro-vehicles as basis for determining where the various types of vehicles should be permitted to travel. The classifications are based on maximum speeds and vehicle weights because: “Speed and weight together determine the kinetic energy of a vehicle, which correlates with the risk of fatal or serious injuries” (Figure 1). This is also why design features such as the number of wheels, riding position, or energy source are not considered in the ITF’s classifications of micro-vehicles.

Due to the rapid adoption and soaring popularity of micromobility, many cities are struggling with the integration of micro-vehicles into the transportation network. For example, in the U.S. micro-vehicles are regulated at the state level, where in most instances legislation is passed distinguishing micro-vehicles like e-bikes from heavier, faster vehicles like mopeds. Making this distinction avoids licensing requirements, potentially allowing e-bikes and e-scooters permission to use bike lanes.

Overall, motor vehicles like cars and trucks present a significantly higher safety risk to pedestrians, however operating or parking micro-vehicles on sidewalks can also negatively impact pedestrian safety. In fact, in many countries, the sidewalk is preserved exclusively for the use of pedestrians and protecting that space for walking is considered a public health priority. During an e-scooter pilot project in Portland, 1,600 complaints of illegal sidewalk riding were received where the complainant expressed feeling unsafe or uncomfortable with a micro-vehicle on the sidewalk. Micromobility industry professionals suggest sharing a sidewalk should only be considered in the short-term or as a last resort.

The best practices for safely accommodating micromobility transportation start with a focus on traffic calming and providing protected, off-road lanes. Specifically, building wider bike lanes is highly recommended as this allows more flexibility and space for multimodal users. Reconsidering traffic calming measures like rumbles strips and speed humps may need to be considered with light weight, small-wheeled vehicles in-mind, possibly opting for safety countermeasures that do not disrupt or alter the roadway surface. Finally, efficient, legible signage and overhead lighting on all routes is also important for ease of navigation and increased safety.

The unregulated parking of micro-vehicles has presented issues around safety, accessibility, and aesthetics in many jurisdictions. It is recommended that cities create designated micro-vehicle parking areas that are not located on sidewalks. This policy helps strengthen the rules against sidewalk riding, prevents the sidewalk from being rendered inaccessible to blind or disabled pedestrians, and decreases the chance of the micro-vehicle user from attempting to ride-off the curb into a stream of traffic.

Instead, a parking technique called “daylighting” is recommended as an ideal approach for both micromobility and pedestrian safety. Engaging this technique requires removing car parking near pedestrian crossings and replacing it with micro-vehicle parking. “Daylighting” clears-up the line of sight near crossings for both pedestrians and drivers while providing an off sidewalk designated parking area for micro-vehicles.

In short, the ITF has 10 recommendations for safely integrating micromobility into your city’s transportation network: