Situated roughly halfway between the metropolises of Toronto and Kingston, the municipality of Port Hope frequently tops lists of Ontario’s charming small towns. And it’s not hard to see why. Surrounded by picturesque farmland, the town of 16,500 boasts one of the best-preserved main streets in the country, dotted with locally-owned shops, restaurants, theatres, and galleries.

Despite the ostensible walkability of the downtown core, the town knew there was room for improvement when it came to pedestrian safety. This was particularly true after dark, which at Port Hope’s northern latitude, can be as many as 15 hours a day in winter.

In 2020, the town convened a committee to identify new marked crosswalk locations. Two were ultimately selected: the first, midblock on Peter Street, a busy four-lane road lined with commercial businesses, and the second on Ontario Street, at the junction of multiple two-lane residential streets. 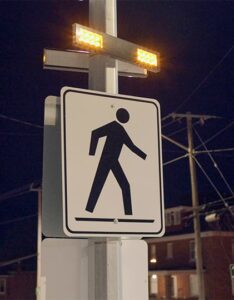 After reviewing the number of lanes, speed, and traffic volumes at each location, engineers consulted Book 15 of the Ontario Traffic Manual (OTM) to determine which treatments to use. Peter Street fell into the Level 2: Type B category, requiring pavement markings, overhead and side-mounted signage, and rectangular rapid-flashing beacons (RRFBs). Ontario Street was Level 2: Type C, requiring similar treatments but without overhead signs.

The municipality also wanted to ensure that the new crossings were compliant with the Accessibility for Ontarians with Disabilities Act. This meant that, among other things, the crosswalk needed to include an accessible pushbutton and detectable warning pad. Finally, there was the matter of pedestrian visibility. While both locations featured standard street lights at the roadside, none were immediately above the crosswalks, and none provided enough light to sufficiently illuminate pedestrians in or approaching the crosswalk.

The system uses Carmanah’s high-intensity SC315-G solar-powered RRFBs as a base, adding a Type 4ME cobra head luminaire overhead to improve nighttime visibility. While other lights have been shown to produce hazardous glare and “spilled light,” this fixture provides uniform light along the crosswalk and proper vertical illumination of pedestrians as they traverse the entire crosswalk area.

Each pole also includes an iNX pushbutton, which comes with an audible locator tone, visual confirmation light, and voice message—”yellow lights are flashing”—to accommodate pedestrians with disabilities. The pushbutton activates the RRFBs and the overhead lights simultaneously, which together grab drivers’ attention and create a safer pedestrian environment. 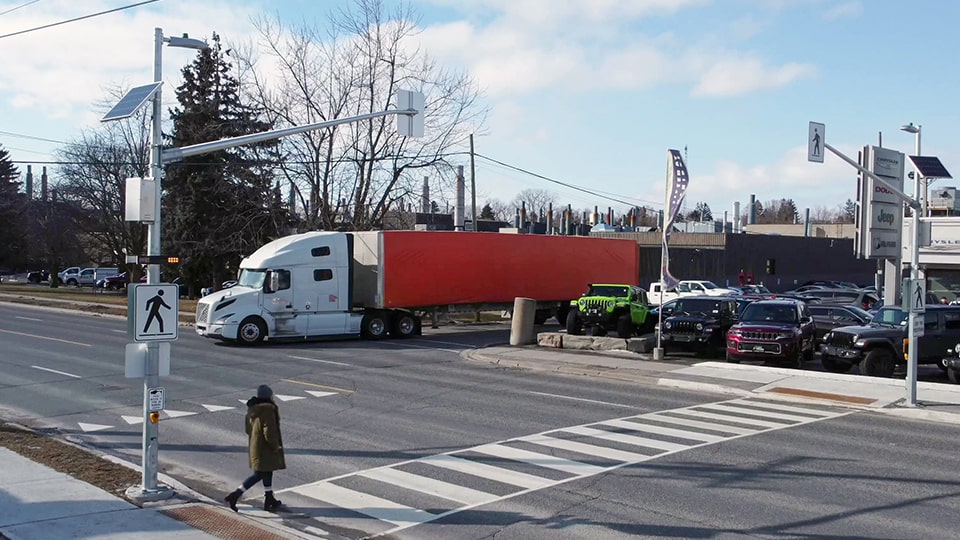 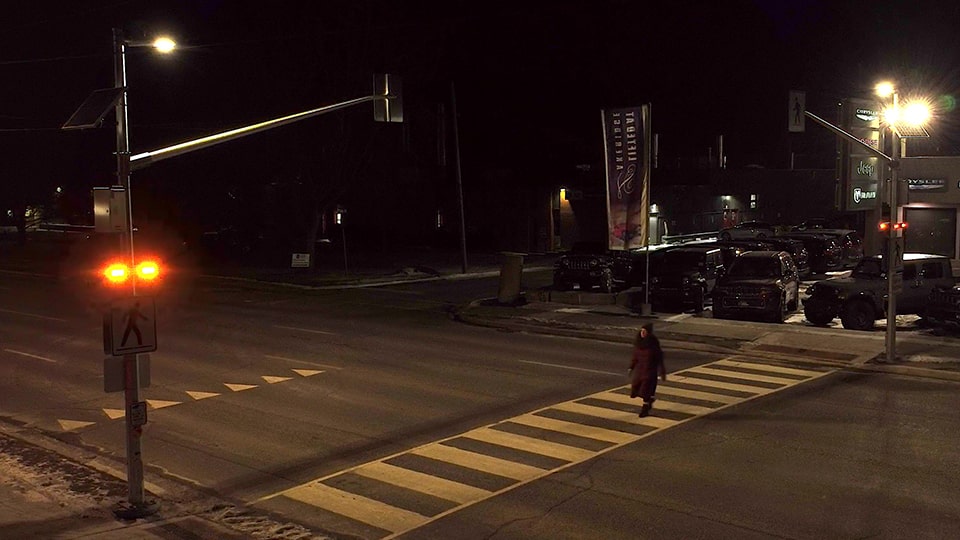 Port Hope’s new enhanced crosswalks were completed in July 2021, making the town a safer and more navigable place for pedestrians, cyclists, and people with accessibility needs.

While RRFBs have on their own been shown to significantly improve yield rates and safety at multilane crossings, the addition of overhead lighting will also encourage more people to use designated crosswalks, and even increase walking in general.

Technical Bulletin B-108: Terms of our warranty for 3rd party devices