The numbers aren’t good, and like the drivers themselves, they’re heading in the wrong direction.

According to the Florida Department of Transportation (FDOT), there were 64 wrong way driving (WWD) fatalities in Florida in 2013. The following year, there were 70. The year after that: 96.

In fact, Florida consistently ranks as one of the worst states in the country for wrong way driving, accounting for 8% of all WWD fatalities in the U.S. between 2004 and 2011.

But FDOT and others are on a mission to change that, piloting new detection and alert systems at some of the state’s most notorious and deadly freeway off-ramps.

For the next phase of the study, FDOT partnered with researchers from the Center for Urban Transportation Research at the University of South Florida to assess the effectiveness of seven “high-tech” proposed countermeasures.

Part of the assessment took place at the university using driving simulators (which included visual and auditory distractions designed to mimic alcohol intoxication), but another part involved field visits to exit ramps so researchers could get a realistic, firsthand perspective.

With a team of state troopers and traffic engineers cordoning off the area, researchers deliberately drove the wrong way on roads and ramps equipped with countermeasure prototypes.

“It was frightening because I knew I was doing something very dangerous,” said Walter Booth, one of the study’s lead authors. “Having a firsthand perspective was valuable because I could see how countermeasures might or might not work.”

After simulating and evaluating the seven different countermeasures, researchers found that detection-triggered rectangular light bars and LED-enhanced “WRONG WAY” signs with alert sending capability (meaning they’re able to send alerts to FDOT and Florida Highway Patrol so troopers can be immediately dispatched) were two of the most effective countermeasures. 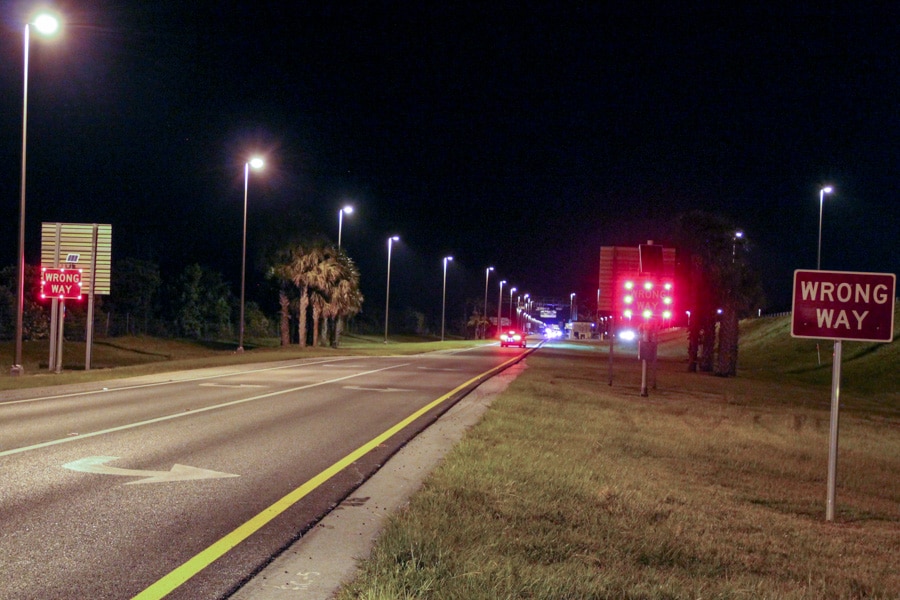 Another study published in 2018 echoed the findings of Booth and his team, indicating that LED and RRFB countermeasures reduced WWD events by 48.1% and 69.4% respectively.

As of early 2020, Florida is deploying wrong way vehicle detection systems, utilizing the new LED-enhanced “WRONG WAY” signs at 520 off-ramps across the state. FDOT also has plans to add nearly double that amount on other high-risk exit ramps the following year with funding provided through the Highway Safety Intersection (HSID) and Highway Safety Improvement Program (HSIP).

Contact our team to find a wrong way driver solution

Though there’s still a long way to go towards reducing WWD crashes, pilot projects in Florida and elsewhere show remarkable progress and promise. Similar systems in Nevada have proven to be 80% effective in stopping wrong-way drivers. Arizona and Rhode Island have also reported recent success in reducing wrong-way driving collisions on their highways.

These findings show that WWD crashes are highly preventable and highlight the need for greater consideration and investment in proactive countermeasures. Departments that explore and implement these emerging technologies will reduce incidents, improve safety and save lives.