Situated on a busy industrial street near the Reno-Tahoe International Airport, the Academy of Arts, Careers and Technology isn’t in a neighborhood most people would characterize as “walkable.” And yet, that’s exactly what many of its 500+ students, parents, teachers, and staff do—they walk: to and from their homes, their cars, and their classes, some of which are held at a community college across the street.

Although there is a school zone in front of the school (with a posted speed limit of 15 mph), the combination of pedestrians and vehicles has led tragic outcomes. In the first five months of the 2019-2020 school year, at least 25 students in Washoe County have been hit. One of them was killed.

“A lot of these school zones don’t have flashing lights or flashing crosswalk lights,” AACT junior Quincy Maross said in an interview for KOLO 8. “Especially in areas like this where it’s an industrial zone, a lot of cars just speed through.”

Upset by their peers being hurt and the lack of action by the city, students at AACT took matters into their own hands last September. A group of students including Maross launched an awareness and fundraising campaign, aiming to purchase a flashing crosswalk system to be installed in front of the school. “We plan to make this a legacy project, so other students at our school can take our project over when we become seniors,” they wrote on a GoFundMe page.

Fortunately, they didn’t have to wait that long. Carmanah learned of the project in late November, and by mid-January, they had coordinated with Sierra Transportation Technologies and the City of Reno to install the system outside AACT. The new pedestrian-activated flashing crosswalk was unveiled at an event hosted by the school district on January 15.

Based on the results of a Solar Power Report (EBR), Carmanah and Sierra recommended a solar-powered R920-E rectangular rapid flashing beacon (RRFB) for AACT’s sunny desert location. Using solar meant costs could be kept low and installation made easy due to eliminating trenching and not having to run power to the location.

“We’ve had very good luck with the E series,” said Jon Dickinson, a project manager at Sierra Transportation and Technologies, noting that Sierra has facilitated the purchase and installation of 40-50 RRFB systems in and around Reno. “The city likes them because they’re quick and easy to install—and they’ve been very effective.” 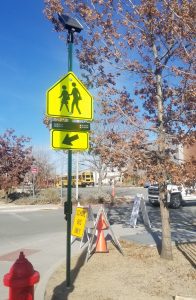 While it’s too early for concrete numbers on increased driver yield rates, students and staff at AACT are already seeing the impact of the crosswalk upgrade. There hasn’t been an incident in front of the school since the system was installed.

“We’re really grateful that we were given this opportunity to install these flashing lights so quickly, and maybe save the life of another student,” said Maross.