Successful RRFB trial in Vancouver, BC leads to additional installations

The City of Vancouver, BC, is world-renowned as a walkable city, with 14% of all trips to work being made on foot—nearly three times the national average of 5.7%, and significantly higher than purportedly walkable American cities like New York (5.9%) and Boston (5.2%).

But it’s not all sunshine and sidewalks for pedestrians in Vancouver. An in-depth pedestrian safety study revealed that there were 3,066 reported collisions involving pedestrians between 2005 and 2010, equivalent to an average of 511 crashes per year. Approximately 75% of these collisions took place at intersections, including in marked crosswalks.

To reduce these numbers, the City embarked on a trial program in 2016 that involved the installation of rectangular rapid flashing beacons (RRFBS) at three busy crosswalk locations. The locations were selected based on large pedestrian volumes and low driver yield rates: one was located near a popular park and playground, another led to a public library, while the third was en route to an elementary school, retirement community, and sports fields. 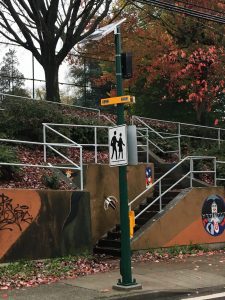 Being a trial program, the City was looking for a solution that they could get up and running quickly that didn’t require the same level of disruption as a traditional, overhead light. Price was also an important factor, according to Winston Chou, the City’s Manager of Traffic and Data Management.

“It’s very quick to install these [solar-powered RRFBs], compared to what we have been using historically, which are pedestrian, cyclist-activated signals, which can cost up to ten times the cost of a flashing beacon and can take much longer to install,” he said.

Of course, the most important requirement was that the solution actually do the job it’s intended to do: increase yield rates and boost pedestrian safety. “[The traditional, overhead lights] are very effective initially for attracting people’s attention but then compliance starts dropping off,” explained Steve Brown, a manager of traffic and data management for Vancouver.

Before the trial, the City had explored a variety of other RRFB products but were continuously disappointed by product and battery failures, especially at high pedestrian traffic locations. As a result, they went through a Request For Proposal process, ultimately awarding the RRFB project to Carmanah and their local distributor, ATS Traffic Group.

Based on the results of a Solar Power Report (EBR), Carmanah and ATS recommended a variety of solar-powered R920-E and SC315-G RRFB systems for the three trial locations. The Carmanah team prepared a comprehensive EBR that outlined their solar simulations on the exact location of the installs, ensuring each system would perform as expected, even during the darkest months of the year.

With the battery, energy management system and solar panel all contained in one unit, the systems also met the project’s requirements of being easy to install and activate—and they were comparatively affordable: around $10,000 a pair (compared to around $100,000 for an overhead light).

But with limited wintertime sunlight and one particularly shady location, the city was skeptical the technology would work. “One of the first locations was particularly challenging with high activations (over 700) and significant shading,” said ATS Traffic Account Manager Steve Henderson. “To overcome this, we recommended the SC315-G model with two 80W solar panels, both mounted on the west side of the crossing to avoid shading… We are pleased to report that since installation, this system has operated flawlessly.” 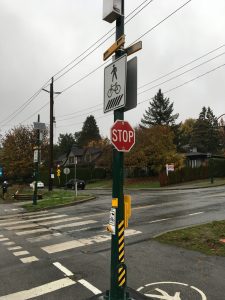 Since installing RRFBs at the first three crosswalks in 2016, the City has gone on to add 17 more between 2017 and 2019, with an additional 12 forecast for 2020. According to Chou, the lights have become an integral part of the city’s Vision Zero strategy.

“We’re seeing a much higher compliance rate of motorists stopping and yielding to pedestrians at the crosswalk,” he said. “In locations where previously these devices were not installed, once they are installed, we’re seeing close to 90% compliance.”

In fact, the City reported that over the three-year course of the pilot project, observed driver compliance to pedestrians increased from 50% before the RRFB to 98% after.

With results like these, it’s no surprise other cities have taken notice—since the trial, neighboring municipalities including Surrey, West Vancouver, and Port Moody have all introduced RRFBs to their crosswalks with similarly positive results.