“Never sell something that you wouldn’t love to buy yourself”

That’s the advice of Art Aylesworth to fledgling entrepreneurs. It’s a seemingly simple premise about marketing, says the CEO of Carmanah Technologies, but one that obviously delivers results. After all, his company, which designs and manufactures solar-powered LED (Light Emitting Diode) lighting solutions, has seen its sales skyrocket from $300,000 to $3.5 million in the past four years. 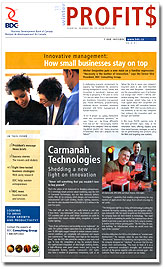 “You start with an idea that you really believe in and take it from there,” says Aylesworth. Today, his products are sold in 107 countries and can be used almost anywhere on earth for applications that require reliable safety, navigation or hazard marker lighting.

“Ease of use, performance and durability are our trademark”, he adds. The publicly traded corporation has an installed base of over 31,000 lights rugged enough to endure extreme environmental conditions, are completely self-contained and require zero maintenance. “We definitely score high on the innovation front,” says the CEO, who joined the company a year and a half ago. To keep the competition at bay, his products feature the sophisticated integration of ultra-bright light emitting diodes, a high-efficiency solar panel power source, and a long-life rechargeable battery system. Carmanah’s LED lights also have a number of proprietary innovations, such as an “intelligent” capability that enables programming for any number of applications that range from school crossings to rail yards.

“The timing was right for us. Today, LED technology is setting the standards for marine, roadway, railway and navigation safety,” says Aylesworth. Still, he’s quick to point out that innovations in his company have not been limited to technology. “Our rapid growth had us scrambling for awhile. Our employee base almost tripled in just over a year and we had to find a way to creatively resolve some of those growing pains.” The first step, he says, was building “an infrastructure where we would never lose sight of the customer”.

A hockey enthusiast, the CEO is a firm believer in “creative team development”. For example, when he saw that there were “disconnects” between his marketing and engineering teams, his company designed an “interface” to ensure that the two groups were communicating. “You have to think of it as a puzzle, understand everybody’s strengths and weaknesses and pull all the pieces together with one common goal — the customer. That’s how we got to where we are today.”